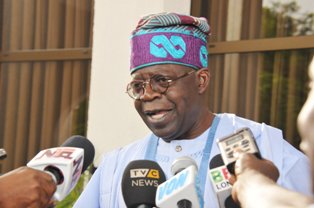 The National Leader of the All Progressives Congress (APC), Senator Bola Tinubu has stated categorically that the ‘Oto ge’; Enough is enough slogan that was used to defeat the current Senate President, Senator Bukola Saraki during the February 23, Presidential and National Assembly elections cannot work in Lagos because the state is working.

This is just as he said that Lagos state unlike other states in the country had witnessed huge development.

Jagaban, as he is popularly called stated this while speaking with journalists shortly after casting his vote at Alausa polling unit.

To buttress his point, Tinubu contended that when he took over as Lagos state Governor in 1999, the Internally Generated Revenue (IGR) of the state was just N600million but that the IGR had grown to N30billion under his leadership.

The former governor added that instead of saying #Otoge, ,the slogan adopted by opposition in Kwara State which led to the defeat of Saraki and all the candidates of the PDP in the Presidential and NASS elections, the slogan in Lagos should rather be ‘Oto pe’; which when translated means “It’s good here.

Speaking further, Tinubu said the real estate sector in the state has recorded unprecedented growth and development with property owners getting “exponential values” better than their counterparts anywhere in Nigeria.

According to him, “No nation or state has achieved financial independence like Lagos.”

On whether he was threatened by those wanting to replicate ‘Otoge’ in the state, Tinubu said, “Lagos is not Kwara. Otoge is in Ilorin. There is limit to copycat. Lagos should be Oto pe”.

He stated that the only party in Lagos is APC, adding that others are seasonal parties that  disappear as soon as election was over and re- appear when election is around the corner.

On whether he was sure of victory , said that he was confident of APC victory in all the elections.