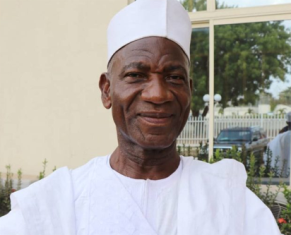 “Every revolution starts like a seed, it grows to become an oak tree,’’ these were the words of the 79 year-old Alhaji LAK Jimoh, the originator of the campaign slogan, “O To Ge”, of the All Progressives Congress (APC) in Kwara.

The septuagenarian whose LAK acronyms stand for Lazeez Ayinla Kolawole, spoke in Ilorin on how he came about the wild fire campaign slogan, “O to Ge” which literally translates to “Enough is Enough’’.

Lazeez Ayinla Kolawole “O To Ge’’ has been described by election observers as an impactful three word campaign slogan effectively used to end decades of political hegemony of a dynasty in Kwara.

The observers saw the APC’s clean sweep of the Feb. 23 Presidential and National Assembly elections in the state as an upset and a death knell for the Senate President, Bukola Saraki and the Peoples Democratic Party (PDP) in Kwara politics.

In the elections, PDP unprecedentedly, lost the presidential election and the entire three Senatorial and six House of Representatives seats to the APC.

The 1971 graduate of Political Science from the University of Lagos said he contested the seat with Saraki, but was “robbed of his mandate’’.

Before, 2010, Jimoh said he had used a similar slogan, “It Is Time For Change’’ in 2003 when he contested Kwara Governorship Primaries of the PDP which was also won by Bukola Saraki. “This movement did not just start in 2018. Every revolution starts like a seed and with time it grows to become an oak tree.

“When I foresaw the revolution that will end the era of bad governance in Kwara, majority of the people did not see it. “People did not see it then and I was accused of being too revolutionary but I assured them that we will ultimately get there. “Gradually, the revolution assumed the spine and magnitude that we just saw in this year’s election, when the people used the power of vote to dethrone decades of political d

Jimoh, who left public service as Permanent Secretary in 1982 for active politics, alleged that for 40 years, Kwara was under the “government of hegemony of exploitation, massive looting of public resources and administration so insensitive to the plights of the people’’.

He said the media hyped multi-billion Naira Shonga Farm project by Bukola Saraki as governor of Kwara was a sham.

“Billons of Naira were pumped into the project but till today no single farm product came out of the farm till it got moribund. “It is all fraud. What they called Zimbabwe farmers were just farm workers, who did not bring a dime to the state for investment yet they called them investors.

“It was the state government that borrowed billions of Naira from the defunct Intercontinental Bank and gave it to these people but we have nothing to show for it,’’ he said.

Jimoh said that Kwara inherited some employment creating establishments like the Jebba Paper Mill, Tate and Lyle Sugar manufacturing company in Bacita and the British Morris Tobacco Company, which had all collapsed because of hostile economic atmosphere.

He alleged that the state owned Trade Bank, was liquidated simply because the management was not cooperating with political authority to use the Bank for looting of resources.

Jimoh said under the watchful eyes of the past administrations also, state owned Gateway Insurance Company, Kwara Express and Kwara Hotels folded up.

He said the state had witnessed a total decay of infrastructure, ranging from bad roads, poor health delivery system, collapse of environmental sanitation and educational system.

“When I saw all these, I said we must not continue in that way and allow these people to destroy the state. “Then, I said, “O to Ge, Enough is Enough. We must rise against the misrule and slavery,’’ he said.

Jimoh said the maladministration started having significant impact on the people when it was extended to the civil service when workers, pensioners and the common man started feeling the pinch.

He said the civil service which ought to be the engine room of government was politicised and turned to rubber stamp.

Jimoh said some Level 12 officers with political godfathers were being appointed as Permanent Secretaries above their seniors thereby, dampening the morale of workers.

He said the situation got so bad that government could no longer pay salaries of civil servants as well as gratuities and pensions of retirees.

“With reckless looting of the state’s treasury and siphoning of government money to individual pockets, the government could not pay salaries of civil servants.

“The entitlements of retirees after 35 years of active service to the state were not paid and they were regularly being called for screening during which many of them died.

“In 2008, the Bukola Saraki government borrowed N3.3 billion from Intercontinental Bank to settle the accumulated arrears of benefits of Kwara retirees.

“When the government received the money, a committee set up for the disbursement recommended that 50 per cent of the money be used for the pensioners while the balance be used for the development of infrastructure.’’

Jimoh said the pensioners challenged the legality of the government’s decision to use the money borrowed to settle their entitlements for development of infrastructure.

He said the matter got to the Supreme Court and many of the pensioners were yet to be paid.

Jimoh said the Local Government Administration was not left out in the maladministration with the Joint Account System which had left the Councils unproductive.

He said the cumulative effects of decades of bad governance led to the mass action and revolution fuelled by “O to Ge movement that witnessed the end of the Saraki grip on Kwara politics.

“It is not just about campaign because the people of Kwara decided that they want a change of government because they were tired of the old order.

“What we have achieved today is the collective efforts of all Kwarans, who wear the shoes and know where they pinch,’’ he said. The Minister of Information and Culture, Alhaji Lai Mohammed, who is the APC leader in Kwara shared the view of Jimoh that the liberation of Kwara from the grip of a crippling hegemony was a collective effort of all Kwarans.

The minister recently said at an event in Abuja, “I must stress and I have said this that the credit for the liberation of Kwara goes to the good people of the state who, in spite of efforts to compromise them, refused to sell their votes. “A simple slogan, O To Ge (Enough is Enough), captured the determination of the people to vote out those who have held them down for decades. And that is precisely what they did.

“The victory in Kwara was achieved in the sweetest way. The election was conducted in an atmosphere of peace and security.

“No single shot was fired throughout Kwara. No one snatched ballot box. It was an atmosphere of conviviality. It was a sharp departure from what used to be in the state. “It confirms what we have been saying, that when there is adequate security, there will be a level playing ground for all the parties, and for all Kwarans,’’ he said.

The minister, however, appealed that the job was not completed yet, until March 9, the date for the Governorship and State House of Assembly elections.

He urged everyone to come out en masse to vote for all APC candidates and make it another free, fair, credible and peaceful election. Mohammed urged the voters to ignore the threat by the opposition to disrupt Saturday’s poll assuring that the government would provide adequate security to protect them.

He said they got the information that the opposition were planning to unleash political thugs to attack and intimidate voters during the Saturday’s poll.

“We have been hearing a lot of things that the opposition has imported a lot of thugs to Kwara to disrupt Saturday’s elections. “If anyone does so, he or she will be risking his or her life.’’

He reassured the people that the Federal Government would provide adequate security for all during the elections scheduled for Saturday. (NAN)

Be the first to comment on "O To Ge’’: How I Originated Campaign Slogan That Dethroned Saraki — LAK Jimoh"