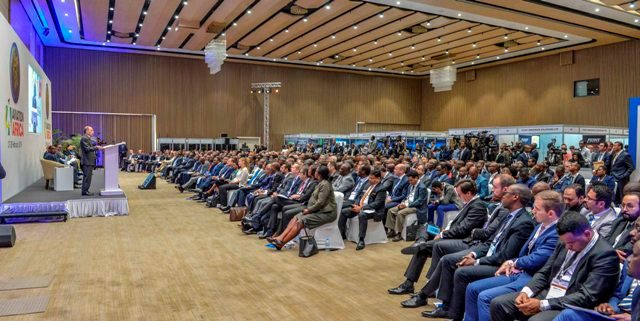 Rwandan President, Paul Kagame has officially declared the Aviation Africa Summit and exhibition opened this morning with a strong message of support for the aviation industry along with a reaffirmed determination to see Africa progress with its ‘Open Skies’ actions.

President Kagame was chairperson of the African Union (AU) in 2018, when the agreement for the introduction of a Single African Air Transport Market (SAATM) was signed by African nations.

According to Kagame, “Sixteen countries in Africa are land locked, including Rwanda – that is almost one-third of Africa – but every country is air-linked. So, geography should not be seen as an excuse for underdevelopment. This highlights the importance of regional integration where there have been some notable achievements over the past year, chief among these is the Single African Air Transport Market.”

“However, the full promise of this pact only becomes apparent in the wider context of the African Continental Free Trade Area, and the Protocol of the Free Movement of Persons which were also signed last year. It is therefore important to attract more countries to join the Single African Air Transport Market, and to fully implement its provisions,” Kagame said.

He added that Protectionism is a short-sighted policy, which only serves to keep the African market fragmented, inefficient, and expensive – thereby reducing opportunities for African firms.

Speaking further, he said, “One industry analysis has calculated the requirement for new aircraft in Africa over the coming generation at more than 1000 aircraft with a value exceeding $150 billion dollars. That means there will be many more high-quality jobs for African pilots, engineers, and service personnel, to operate and maintain this equipment professionally, and above all, safely.”

The Minister of Infrastructure and Transport for Togo, whose President Faure Gnassingbé is the AU’s ‘Champion’ of the initiative, also called on African states who have signed the commitment to ‘implement without delay’.

According to Hon. Mme Zoureatou Tchakondo Kassa-Traore,“There is no doubt about the benefits to our States from the full implementation of SAATM. By integrating our air routes and opening up the African skies with the implementation of SAATM, we are broadening the paths of growth and development of our continent.”

The fourth edition of the Aviation Africa Summit & Exhibition saw more than 800 delegates from 71 countries converge on the Kigali Convention Center.

“The Aviation Africa summit has established itself as an important business event on the African calendar,” said Hadi Akoum, Vice President, Sales for Sub-Sahara Africa & the Indian Ocean Islands at Airbus.

“With urbanisation, population growth and economic expansion, Africa’s air travel market is doubling in size every 15 years, making it one of the fastest expanding markets. When one takes a broader view, aerospace in Africa also presents significant opportunities for industrial, social, knowledge-based and entrepreneurial partnerships that are essential to sustainable development.”

According to him, “Africa is a promising land for aviation. The list of distinguished guests here today is clear confirmation of Africa’s commitment to reach new heights in the coming years. The launch of SAATM in January 2018 and the African Continental Free-trade Area in March of 2018 are testament of Africa’s visionary leadership and long-term thinking in aviation.”

“Going forward, we need to support the successful implementations of regional initiatives that aim to improve Africa’s position in the areas of igniting integration, trade, human capital, air connectivity, and tourism. I don’t think there is any continent in the world that has bigger tourism potential growth than Africa,” he added.