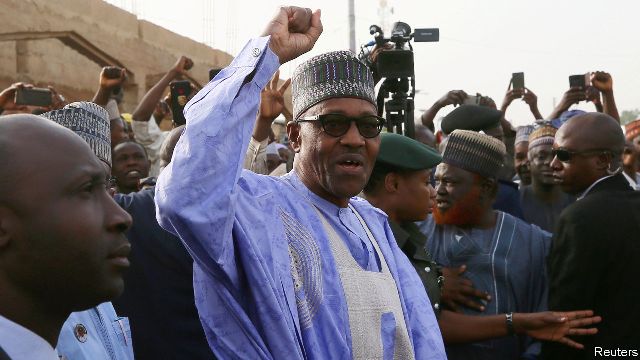 The Independent National Electoral (INEC) has declared incumbent President Muhammadu Buhari of the All Progressives Congress (APC) as Nigeria’s President-elect having scored the highest number of votes in last Saturday’s Presidential election.

INEC Chairman, Prof. Mahmood Yakubu, who is also the Chief Returning Officer for the Presidential Election said Mr Buhari would be presented with a Certificate of Return alongside his vice, Yemi Osinbajo at 2pm today.

Buhari was declared President-elect at about 4:43am on Wednesday.

Declaring Buhari the winner, INEC Chairman said, “I, Prof. Mahmood Yakubu hereby certify that I was the Returning Officer for the Presidential Election held on the 23rd day of February, 2019. That the action was contested; that the candidates received the following votes. Having announced the scores of the 73 Presidential candidates, Yakubu said, “That Muhammadu Buhari of the All Progressives Congress APC having satisfied the requirements if the law and scored the highest number of votes, is hereby declared winner and is returned elected”.

Meanwhile, the Peoples Democratic Party (PDP) has kicked against the results as announced by INEC for the Saturday Presidential election.

Shortly before INEC announced results, the PDP Presidential Collation Agent, Osita Chidoka urged INEC not to make any return but to declare the election inconclusive in certain parts of the country and order a rerun.

Chidoka stated that PDP would seek legal options to reclaim its mandate and refused to append his signature to the Result Sheet like other agents.

“The PDP does not accept this result as representing the valid votes of Nigerians, we have made three issues; first, after all the investments in technology, we required INEC, after spending N27 billion in this year’s budget alone for technology, we had expected that today, INEC would have for the purpose of transparency not just for law would have projected to us the results of what the card reader that they used displayed about the people that went through the card reader verification, that singular act puts a dent on the credibility of the election,” Chidoka said.

He continued, “The second one is the issue we raised about the number of registered vis-à-vis if what the chairman now calls collated voters means that 1.6 million people are missing in the voter register. We think that issue is substantial enough to require a resolution. “We also believe that the difference between the accredited voters and the total votes cast which came to about 750,000 votes requires an issue to be looked at.”

Speaking further, he said, “Finally, we believe that the cancellations that took place in the election impacting 2.7 million voters require to be looked into seriously. “So, in our view this election requires to be looked at again and possibly we would have had a rerun, more importantly, we think that INEC should have looked consciously on the use of the card reader, the absence of card reader is a major violation in the elections, it renders that election null and void, that is what the chairman promised us. “So, for us in the PDP, we believe that this is a new low in Nigeria’s electoral history. Since 2015 we believe that Nigeria would have been making progress in the election, but violence in this election, the issues that have arisen in this election, lack of transparency that we saw in this election did not increase nor improve the belief of Nigerians in the electoral process. However, the PDP remained a very lawful party, we believe in the law, we believe in the constitution of Nigeria, we are committed democrats, PDP is a party that entrenched democracy in Nigeria, the PDP is the party that made it possible for Nigeria to enjoy the fruits and dividends of democracy. We will continue to support democracy in Nigeria, we will continue to promote democracy in Nigeria but we have a good message for Nigerians, we want them to remain peaceful, we will explore all our options, including the belief that the legal process in Nigeria is one of the ways to resolve issues”.

But he was how countered by Festus Keyamo, an agent of the APC, who hailed the election and said the ruling party would also be filing petitions regarding results declared in some Southern states.

Be the first to comment on "INEC Declares President Buhari Winner With 15, 191, 847 Votes"