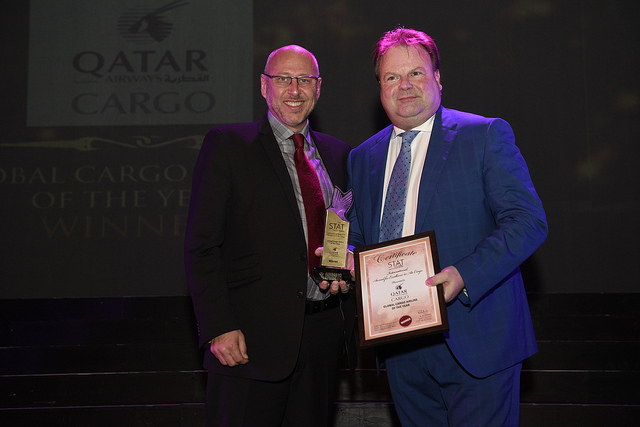 The coveted award was given at this year’s ‘Air Cargo Africa’ air freight industry trade exhibition and conference, held in Johannesburg, South Africa from 19–21 February 2019.

The cargo carrier was also runner-up for the ‘Global Air Cargo Brand of the Year’ and ‘International Cargo Airline of the Year in Africa’ awards.

Qatar Airways Cargo Senior Vice President, Cargo Sales and Network Planning, Mr. Peter Penseel, received the awards on behalf of the airline at a glittering awards ceremony organised by STAT Trade Times on 20 February at the Barnyard Theatre in Johannesburg.

This is the second consecutive year that the cargo carrier has won the Global Cargo Airline of the Year award, following the ceremony that took place in 2017 at Air Cargo Africa.

These awards recognise the carrier’s continuous drive and emphasis on innovation and delivering the highest levels of service within the air cargo industry.

Commenting on this remarkable achievement, Qatar Airways Group Chief Executive, His Excellency Mr. Akbar Al Baker, said, “It gives us great honour and joy to receive these awards. Qatar Airways Cargo has come a long way to be ranked as one of the leading air cargo carriers globally. Being voted by the air freight community means a lot to us. It is for our global customers and employees that we strive to build our success upon the foundation of service excellence, always ensuring that our customers’ needs are of primary importance. Our business partners and dedicated team at Qatar Airways Cargo are the ones who have made this achievement possible, and we extend our special thanks to them.”

The awards in each category are decided after two rounds of online voting by readers of STAT Trade Times magazine.

Qatar Airways Cargo had a very successful 2018, with positive growth in both tonnage and revenue.

Future plans include the construction of the carrier’s Cargo Terminal 2, which is already underway. Once complete, the terminal will increase annual cargo capacity at Qatar Airways’ hub in Doha to 3.2 million tonnes annually.

The cargo carrier continues to seek new opportunities to invest and grow the business, benefitting not only its customers but the entire air cargo community