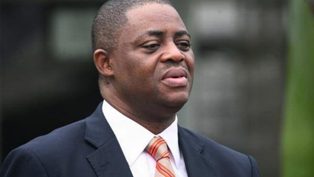 A Prosecution Witness, Mr Seun Shuaibu, today, told a Federal High Court sitting in Lagos that a former Minister of State for Finance, Nenadi Usman and others transferred a total sum of N350 million to former Governor of Imo State, Mr Achike Udenwa.

The witness, an investigator with the Economic and Financial Crimes Commission (EFCC), gave the evidence at the resumed trial of Usman, former Minister of Aviation, Mr Femi Fani-kayode, Mr Yusuf Danjuma, a former Chairman of the Association of Local Governments of Nigeria (ALGON) and a company , Joint Trust Dimension Ltd and others, facing N4.6 billion money laundering charges.

The defendants had each pleaded not guilty to the 17-count charge of money laundering preferred against them by the EFCC and were granted bails.

At today’s proceedings, Shuaibu, who is testifying as third prosecution witness, told the court that on January 13, 2015, the sum of N400 million was transferred to the account of Joint Trust Dimension Limited, from the Ministry of External Affairs.

The Prosecutor, Mr Rotimi Oyedepo, who led the witness in evidence, asked the investigator to give a synopsis of his findings in relation to exhibit eight, the statement of account of the company, and the funds paid into the account on January 13, 2015.

In his evidence, the witness told the court that on the same date January 13, 2015, the sum of N120 million was transferred to Achike Udenwa, a former Governor of Imo State and also to one Biola.

He said that the commission had invited Udenwa to its office in relation to the transfer, adding that his statement was taken after a cautionary word.

According to the witness, the former governor admitted receiving the funds and claimed that it was for the purpose of political campaign for former President Goodluck Jonathan.

The prosecutor then asked: “From your investigation, was that the only time Udenwa received funds from Joint Trust”

The witness replied No.

Giving further evidence, the witness told the court that the former governor received payments in about three installments.

Prosecutor asked: “Still on your findings in relation to Joint Trust, can you confirm if you had any contact with a company called “Friendship Express”

He told the court that on January 13, 2015, the sum of N80 million was paid into the Friendship Express company account from Joint Trust.

He said the Director of the company was invited to the Commission’s office, and his statement was taken, and he admitted receiving the funds.

At this stage, counsel to the first defendant, Chief Ferdinard Orbih (SAN) raised objection to the testimony of the witness on the grounds that the witness could not give evidence as to the content of a document which was not frontloaded.

Orbih called such evidence adduced by the witness, as a triple hearsay, and urged the court to expunge the evidence from its record.

The Second defence counsel, Mr Norrison Quakers (SAN) agreed with the submissions of first defence counsel and similarly requested that the witness statement should not be recorded.

In reply, Oyedepo argued that the evidence of a witness as to what a suspect under his investigation told him, cannot amount to a hearsay.

Citing the authority of Olaoye Vs State, he described the evidence as direct, and urged the court to so hold.

In his decision, Justice Mohammed Aikawa, overruled the objection of defence counsel, and ordered the witness to proceed with his evidence.

. In continuation of his evidence, the witness told the court that in the course of investigation, the sum of N40million was recovered out of the N80million paid to the company.

Prosecutor :”Confirm to the court if you came across one Musa Mohammed Sada”

Oyedepo: “From exhibit eight, particularly on January 16, 2015, tell the court your findings as to the entry on that date, ”

Witness replied that on January 16, 2015, investigations revealed that the sum of N800 million was transferred from the Ministry of External Affairs to the account of Joint Trust Dimension Limited, without execution of any contract.

Oyedepo “How did you meet Musa Mohammed Sada”

Witness said: “On January 19, 2015, the sum of N80 million was transferred from Joint Trust to Musa Sada’s account; we invited him and his statement was taken ”

According to the witness, Musa then refunded the sum of N25 million.

Oyedepo: “At the last adjourned date you identified exhibit nine, as the instrument for the transaction which are the cheques of Joint Trust, can you remember”

When shown the original copies of the cheques to identify, the witness confirmed they were same cheques.

The prosecution tendered the 21 cheques before the court in evidence.

The court has adjourned until Feb. 21 (tommorow) for continuation of trial by 11.00am.

In the charge, the defendants were alleged to have committed the offences between January and March 2015.

In counts one to seven, they were alleged to have unlawfully retained over N3.8 billion which they reasonably ought to have known formed part of the proceeds of an unlawful act of stealing and corruption.

In counts eight to 14, they were alleged to have unlawfully used over N970 million which they reasonably ought to have known formed part of an unlawful act of corruption.

Also, in counts 15 to17 Fani-Kayode and one Olubode Oke, who is said to be at large, were alleged to have made cash payments of about N30 million, in excess of the amount allowed by law, without going through a financial institution.

Besides, Fani-Kayode was alleged to have made payments to one Paste Poster Co (PPC) of No. 125, Lewis St., Lagos, in excess of amounts allowed by law.