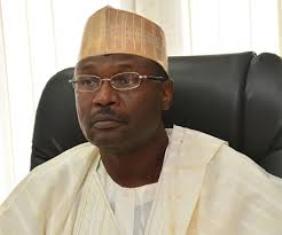 The National Chairman, Independent National Electoral Commission (INEC),Prof. Mahmood Yakubu, has stated that the Department of State Security (DSS) did not invite any of the commission’s National Commissioner for questioning as been speculated.

He said this while giving updates on INEC preparation for the rescheduled Presidential and National Assembly (NASS) elections to stakeholders in Abuja today.

Recalled that there were insinuations in some quarters that the National Commissioner on Logistics, INEC, Dr. Okechukwu Ibeanu, was invited by the DSS to explain his role in the postponed elections.

But reacting, Yakubu said that there was nothing of such.

The INEC boss disclosed that the commission has successfully deployed all the materials to states across the country, adding that the Commission was ready to conduct credible elections come Saturday, February 23 and on March 9.

He also disclosed that 95 per cent of the Smart Card Readers have been re-configured ahead of the scheduled time, assuring that remaining 5 per cent would be concluded by tomorrow; Wednesday.

Yakubu refuted the claim that one of the suppliers of the Smart Card Readers was involved in the configuration process, adding that it was not true

The configuration, he said was done entirely by the staff of INEC.