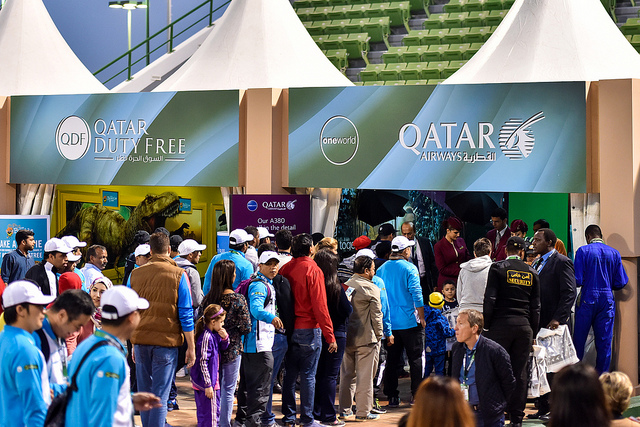 Joining the champions competing in this year’s event is three-time Grand Slam champion and 2014 finalist Angelique Kerber and two former world No. 1 players, Karolina Pliskova of the Czech Republic and Simona Halep from Romania.

Both Qatar Airways and QDF will host special booths at the sponsors’ village, offering tennis fans a taste of their world-renowned five-star service.

The Qatar Airways booth will feature an interactive green screen, where tennis fans can get their photos printed on virtual backgrounds featuring destinations such as Doha, Da Nang and Gothenburg and an A350-1000 aircraft.

The QDF booth will also feature a quiz accompanied by a photo opportunity where visitors will have to guess the number of branded tennis balls and share it on social media, for a chance to win a hamper filled with exciting prizes offered by Qatar Duty Free.

Speaking on the sponsorship, Qatar Airways Senior Vice President Marketing and Corporate Communications, Ms. Salam Al Shawa, said, “Qatar Airways is delighted to once again sponsor the Qatar Total Open 2019, which brings many of the world’s most talented female tennis players to Doha to compete for the coveted championship title. Every year, this exciting tournament is a major highlight on Qatar’s sporting calendar, drawing thousands of spectators and fans of all ages.

“Our sponsorship of the Total Open Women’s Tennis Tournament further demonstrates our commitment to the Qatar 2030 vision to become a global sports destination. We continue to support the emergence of sports in the country, and being the bridge to welcome world sporting champions to Qatar.”

Also speaking, Qatar Duty Free Senior Vice President, Mr. Bruce Bowman, said, “Following our sponsorship at the Qatar ExxonMobil Open 2019 tournament, Qatar Duty Free is once again proud to be actively involved in Qatar’s international calendar of sporting events through our sponsorship of the Qatar Total Open Women’s Tennis Tournament 2019. Qatar has been making headlines in the sports world, most recently with our national team’s memorable win at the Asian Cup 2019. We are pleased to be able to contribute to the country’s vision to ensure we gear up for 2022 FIFA World Cup Qatar.”

He continued, “This week, we are welcoming players and spectators alike to Doha through our home, Hamad International Airport. We look forward to hosting visitors in our booth at the public village, and we wish the best of luck to all who take part in our competition.”

Qatar Duty Free has also sponsored the Commercial Bank Golf Masters since 2009 and this year, has extended its sponsorship of this sport to the annual TFWA Golf Tournament at the TFWA World Exhibition & Conference in Cannes, which will welcome more than 3,000 duty free and travel retail brands and 500 international exhibitors, reaching more than 2,000 key executives from major landlords and duty free retailers.

In addition, Qatar Airways is the official airline sponsor of CONMEBOL professional football competitions across South America, including the Copa CONMEBOL Libertadores, Copa CONMEBOL Sudamericana and the CONMEBOL Recopa.

In May 2017, Qatar Airways announced a groundbreaking sponsorship deal with FIFA, which saw the award-winning airline become the Official Partner and Official Airline of FIFA until 2022.

The partnership, one of the biggest sporting sponsorships in the world, will give Qatar Airways extensive marketing and branding rights at the 2022 FIFA World Cup Qatar.