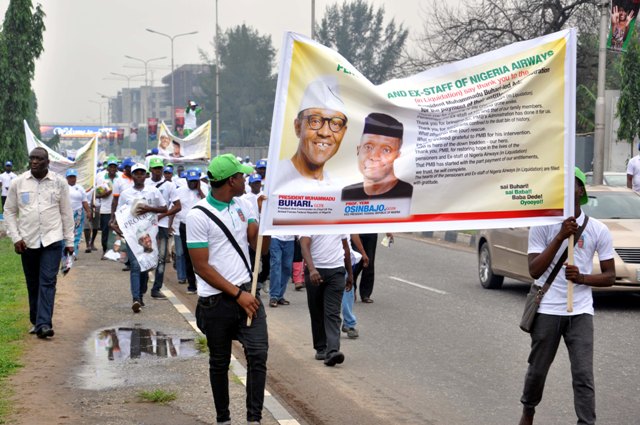 At 8 am ex-workers and pensioners of the defunct Nigeria Airways Limited (NAL) trooped into the Skypower Catering premises at the Murtala Muhammed Airport(MMA),Lagos to converge for the ‘Mother of All Rally’ first of kind in the industry .

The ex –workers and pensioner, who wore T-Shirt with the inscription ‘PMB Did It’ marched from Sky Power Catering their meeting point through the Murtala Muhammed Airport Access road to MMA2 — Ikeja round and terminate the rally at the Air Transport Services Senior Staff Association (ATSSSAN) Secretariat. At ATSSSAN Secretariat, the Minister for Information and Culture, Alhaji Lai Muhammed, who addressed the teeming crowd, commended the ex-workers and pensioners for the show of appreciation and for organising the event.

He stated that the Federal Government was committed to the welfare and well being of Nigerians wherever they may be and that has led President Muhammadu Buhari to end the 14 years wait and suffering of the ,5996 former staff of NAL, who have started receiving payment of their pension arrears and other benefits from the Federal Government. * Ex-workers and pensioners of NAL at the rally

The Minister said that the Federal Government has introduced some programmes beneficial to Nigerians, which includes: stipends to 300,000 house hold, introduced a home grown school feeding system, N10, 000 Trader Moni, which according to has covered N1.2million people.

He added that since the liquidation of NAL, successive administration have failed to settle the ex-staff, leading to untold suffering and loss of human dignity by affected people.

According to him, “It is not just the former staff of Nigeria Airways Limited, who have benefited from the people –oriented policy of this administration .Former Biafran policemen, former workers of Aladja Delta Steel and former NITEL workers have also seen their years of suffering and neglect come to an end ,thanks to President Muhammadu Buhari.”

He assured that for the more than 800 deceased ex-staff of NAL, their next of kin will also receive the entitlement due to them.

“Your show of appreciation and indeed your support for the President could have come at a better time, as we are just a few days to the presidential elections. With your support   and votes , the President will be re-elected to another four –year term to continue his good works for the good people of Nigeria,” he said.

On his part, the Coordinator of the Ex-NAL workers and Pensioner, Alhaji Lookman Animasaun, appealed to his colleague to vote for President Buhari in his re-election bid, adding that he is the only one that cares about the plight of the ex-workers.

He stated that today’s rally was to appreciate the president for paying 50 per cent of their entitlements, adding that because of this they are ready to vote for the president come February 16,2019.

Be the first to comment on "NAL Ex- Workers, Pensioners Flag Off Buhari Presidential, Appreciation Rally"