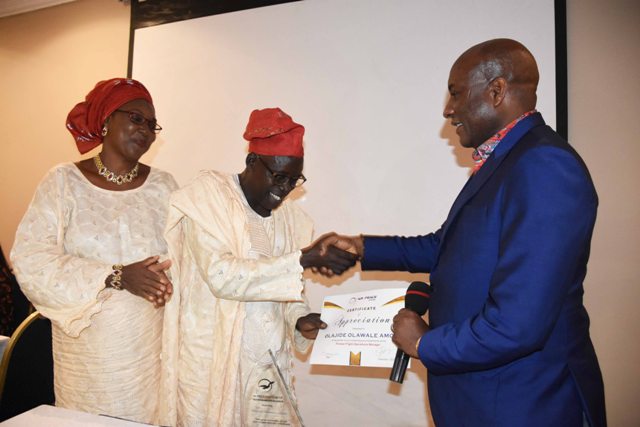 * Air Peace Chairman/Chief Executive Officer, Mr. Allen Onyema (right) presenting a certificate and plaque to the airline’s pioneer Flight Operations Manager, Mr. Olawale Amos Olajide in appreciation of the latter’s service to the carrier, while Mrs. Paulina Olajide applauds during a retirement reception by Air Peace in honour of Olajide in Lagos on Thursday

Chairman/Chief Executive Officer of Air Peace, Mr. Allen Onyema has urged aviation workers, especially those in the airline arm of the industry, to imbibe the virtues of hard work, humility, honesty and integrity to save their organisations from going down.

Onyema made the call during a reception held in honour of retiring Air Peace Flight Operations Manager, Mr. Olawale Amos Olajide in Lagos.

The Air Peace boss decried the increasing trend of dishonesty among airline staff, saying a lot of carriers had been destroyed by their workers’ lack of integrity and disloyalty.

He described Olajide as a dedicated, hardworking, honest and humble man of exceptional integrity and professionalism in the aviation industry.

Olajide, he said, joined Air Peace as pioneer Flight Operations Manager on July 1, 2013 and made huge contributions to the carrier’s ascendancy to the leadership of the air travel business in Nigeria and West Africa. “Olajide would have retired two years ago. When he came to tell me, he did not say he was retiring to go and join another airline, because one thing is certain in this country, there is no airline better than Air Peace. I say this with every sense of humility and responsibility. When he told me he was retiring, I couldn’t take it. I told him ‘you are not going anywhere. You have to continue until I say it is okay’. He honoured my request to stay for another two years.

“Let me tell you something that you have to know tonight. If you have not got to the stage your employer will not allow you to leave, then you should begin to ask yourself questions. I want all of us here to make it impossible for your employer to let you go.

“What I am saying here is to encourage you to be like Mr. Olajide. Mr. Olajide gave his all to Air Peace.

He contributed immensely to everything we are today. He doesn’t react to pressure. Whatever comes, Mr. Olajide remains the same calm Mr. Olajide. He uses his calmness and humility to disarm you. He has patience in abundance. He has tolerance in abundance. I wish we all will learn from him. He is a man of integrity and honesty,” he said. * Air Peace pioneer Flight Operations Manager, Mr. Olawale Amos Olajide and his wife, Paulina during a retirement reception by the airline in honour of Olajide in Lagos

Onyema thanked Olajide’s spouse, Paulina and children for supporting their patriarch to sustain his reputation of hard work and honesty.

He urged Olajide’s children to follow their father’s example and acquit themselves creditably in their different places of work.

He presented a certificate of excellence, cash and car to the retiring member of staff, saying Air Peace was grateful for his dedication to duty and would miss his valuable contributions to its flight operations.

Responding, Olajide said he was grateful to Onyema and Air Peace for the opportunity offered him to contribute to efforts to grow the airline.

He assured that he would continue to be part of the carrier’s vision to transform air travel in the country and beyond.

Be the first to comment on "Imbibe The Virtues Of Hard Work, Honesty,Onyema Tells Workers"