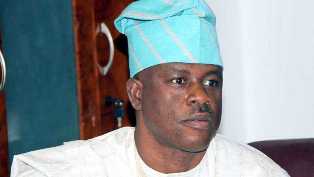 A former Minister of State for Defence , Senator Musiliu Obanikoro Tuesday, admitted before a Federal High Court in Lagos, that he was investigated by the Economic and Financial Crimes Commission (EFCC) for being privy to illicit transfer of funds.

Obanikoro made the statement while giving evidence in the criminal trial of immediate past Governor of Ekiti State, Ayodele Fayose, facing charges of N6.9 billion fraud.

Fayose was arraigned by The Economic and Financial Crimes Commission (EFCC) on October 22, 2018, alongside his company Spotless Investment Limited, on 11 counts.

He pleaded not guilty to the charges, and the court had granted him bail in the sum of N50 million with one surety in like sum.

Trial commenced on November 19, 2018, with the EFCC calling four witnesses, while the court had then adjourned for continuation of trial.

At the resumed hearing of the matter on Tuesday, Mr Rotimi Jacobs (SAN) appeared for the EFCC, while Messrs Ola Olanipekun (SAN) and Olalekan Ojo (SAN) represented the first and second defendant respectively.

Obanikoro, the fifth prosecution witness who had began his evidence on January 21, and cross examined on February 4, mounted the witness box in continuation of his cross examination.

Obanikoro during cross examination by second defence counsel, Mr Olalekan Ojo (SAN), told the court that during his tenure as Commissioner in Lagos in charge of Home Affairs and Culture, he had interfaced with various security agencies in the discharge of his duties.

According to him, he had sourced for an outfit known as Silva Mcnamara, owned by one Kareem Taiwo, to the office of the National Security Adviser, (NSA)  when the need arose to provide for security operations in Lagos State.

He said that the outfit performed credibly and did a good job.

Ojo then asked the witness, “you said Kareem Taiwo did a good job” Witness replied “Yes, ”

Ojo “Then are you not surprised that a petition was still written by the NSA against both of you, for having gotten money from the NSA illicitly, ”

Obanikoro replied in the affirmative and added: “And I state that I deserve a medal of honour for the great work I did in securing Lagos State, ”

Ojo: “Am sure you are aware of the offences you were alleged to have committed for which you were granted bail by the EFCC, ” Witness replied “Yes”

Defence counsel then asked the witness to tell the court the offence.

Obanikoro replied :”It was based on a petition sent by the NSA that about N4.6 billion or thereabout was sent in an account operated by me”

Defence : Will I be right to say that the allegations consisted of fraud”

Witness ” until I see it”

Defence asked: “Are you still on Administrative bail”

Witness replied: “Well, I have not been discharged to the best of my knowledge.

Defence : “It was also alleged that there were no approvals for the funds alleged to have been transferred to a number of companies listed in exhibit I, including Silva Mcnamara,” the witness replied “correct”

Defence :”So I suggest to you that at all material time, you were being investigated to have been privy to illicit transfer of funds, ”

Defence “Till today, the allegation of illicit transfer of funds has not being withdrawn against you by the EFCC, ”

Witness “To the best of my knowledge you are correct, ”

The witness replied No, but added that the office of the NSA had responsibility for coordination of security across the nation, some of which are clandestine and not documented.

Defence: “Can you tell the court by what means you gave the instruction and to whom, ”

Witness “Verbally, to the then Managing Director of Diamond Bank Mr Oti ”

Defence: “Was there any time your verbal instruction was reduced into writing, ”

Defence “So, I suggest to you that what you are telling this Court is that there is no written record for the release of N1.2billion by the bank”

Witness “Because of the nature of the job.,

Defence: look at exhibit E9 -E11″ and mention the names of the Directors of Silva Mcnamara,”

Ojo then said, i suggest to you that Ikenna Ezekwe lived in that house at one time or the other,”

Subsequently, Ojo sought to tender an extra judicial statement made by the then Special Assistant  to Obanikoro, Mr Justin Erukaa and the Prosecutor raised objection.

Following the objection by prosecution, Justice Mojisola Olatoregun adjourned the case until February. 6 by 9.am , for counsel to address the court on the admissibility of an extra j-udicial statement.

According to the charge, on June 17, 2014, Fayose and one Agbele were said to have taken possession of the sum of N1.2 billion, for purposes of funding his gubernatorial election campaign in Ekiti State, which sum they reasonably ought to have known formed part of crime proceeds.

Fayose was also alleged to have received a cash payment of the sum of five million dollars, (about N1.8 billion) from the then Minister of State for Defence, Sen. Musiliu Obanikoro, without going through any financial institution and which sum exceeded the amount allowed by law.

Be the first to comment on "N6.9B Fraud: I was Investigated For Financial Crimes–Obanikoro"