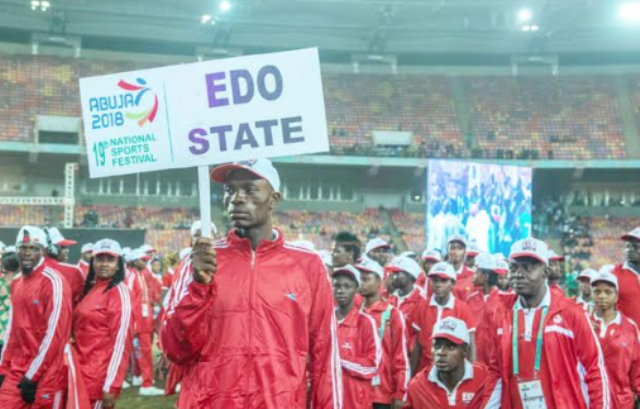 The Federal Government and Edo State Government have signed a Memorandum of Understanding (MoU) on the hosting of the 20th edition of the National Sports Festival (NSF) in Abuja.

Signing the MoU that is the “Host State Agreement”, the Minister of Youths and Sports Development, Solomon Dalung, said the act was very meaningful.

According to him, “This is to restate that Edo was not just offered the hosting rights of the Benin 2020 Festival, but it contested for the rights and won.”

Dalung disclosed that Edo contested with Cross River, Delta, Imo and Kaduna State in a rigorous process and expressed his appreciation of the efforts of the governor and people of the states involved.

In his words, “I am elated that at the closing ceremony of the 19th NSF in Abuja, we were able to secure a host state for the 20th edition of the Games. This ceremony is significant as it not only confirms but reassures Nigerians that the host state for the next NSF is ready and willing to undertake the responsibilities of hosting a festival of this magnitude.”

He continued, “I am encouraged with the venues and facilities I saw in Edo during my recent visit. From my inspection, Edo has enough facilities to host not just the Festival but international events.”

The Minister advised the state to put in place as soon as possible the festival’s Local Organising Committee (LOC) and such subcommittees as it deems necessary.

The state, he said should also provide befitting board and lodge for members of the Main Organising Committee (MOC), Games Services Sub-Committee and the MOC Secretariat.

He also urged the state to ensure that the security of lives and property of dignitaries, athletes, officials, spectators and guests throughout the period of the Festival was provided.

The state Dalung said should embark on a sensitisation and awareness campaign among its citizens to ensure lots of spectators for the festival tagged “Benin 2020’’.

Speaking shortly after signing the MoU, Edo State Governor, Godwin Obaseki, stated that the key component of Benin 2020 was the renewal of Nigeria, promoting its core value and peace.

Obaseki said Edo has facilities across the state to successfully host the 20th edition of the NSF, adding that the state was ready for the games.

According to Obaseki, “I want to express the profound gratitude of all citizens of Edo for the confidence which the Federal Government has reposed in us to host the 2020 NSF. We do not take this very lightly, being a state with history in sports. We clearly understand the implications of the hosting rights.

“Edo was an integral part of the idea of formulating a National Sports Festival after the Nigerian Civil War of 1967 to 1970. So, we are very cognisant of the goals and purposes of this sports festival. One of its cardinal points is to build unity and patriotism, particularly amongst young people in Nigeria, to develop sports talent and serve as a hunting ground for recruitment of talents at the grassroots,” Obaseki said.

Obaseki said the state was already putting finishing touches to reconstruction works at the Samuel Ogbemudia Stadium in Benin, adding that this would soon be completed. He then proposed that a National Council of Sports meeting be held on Feb. 21 for planning to commence early ahead of the 20th NSF slated for March 2020.