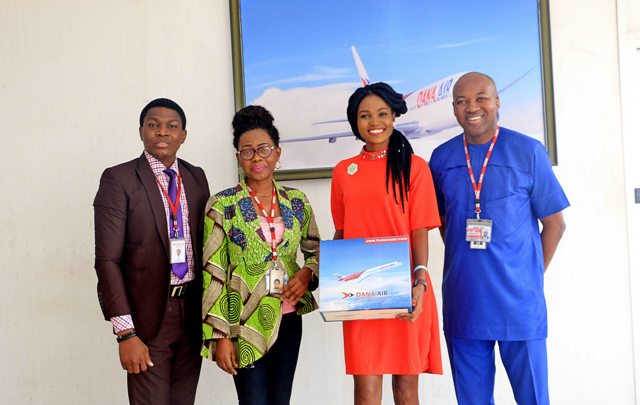 The airline made the pledge when the winner and organisers of the first ever cabin crew contest paid a courtesy visit to its MMA2 office in Lagos recently.

Dana Air’s Chief Operating Officer and Accountable Manager, Mr Obi Mbanuzuo while speaking at the event said, ‘’Dana Air is resolute in its support for initiatives like the Cabin crew contest and any concept that encourages professionalism and standards in the aviation sector and we see these as part of ways to further imbue and entrench it in our industry.

We are glad to have received the winner and we believe she has gone through the rudiments. It is now time for her to undergo our training which is also strictly based on standard operating procedures and customer service.’’

Also speaking at the brief ceremony, the CEO of Crew Training Institute, Katheryn Lademo said, ‘’we are grateful to Dana Air for the wonderful reception today. We are indeed proud to have you as the official sponsor for the Cabin Crew Contest. Out of about 200 contestants who participated in season one, Toluwani Abayomi, who hails from Ondo State emerged winner and is now a proud staff of Dana Air.

Season Two, which will hold in 2019 is planned to be even bigger and better especially with our new media partners.

Unlike season One, participation in season two will not be restricted to Nigerians only; instead we plan to make it a Pan African event and this means wider participation across Nigeria and Africa and we look forward to a continued, mutually beneficial partnership with Dana Air as we forge into 2019.’’

Dana Air is the headline sponsor of the first ever cabin crew contest.

The airline’s commitment and investment in training and retraining of its crew which she describes as safety officers has seen the airline’s flight operations crew bag numerous awards.

Currently, the airline’s crew members – Master Collins Ginika and Ms Chiogor Okani are the reigning King and Queen of the air at the 2018 edition of the Nigerian Aviation awards, a recognition they bagged as winners of a cabin crew contest among domestic airlines at the awards ceremony.

Be the first to comment on "Dana Air Pledges Continued Capacity Building, Professionalism"