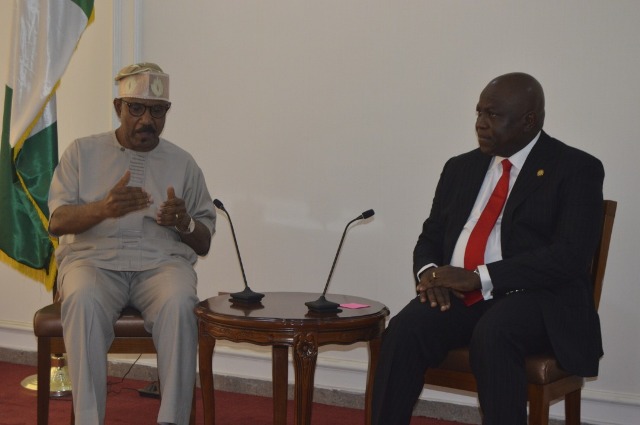 *The Managing Director of NIWA, Senator Olorunibe Mamora and the Governor of Lagos State, Akinwunmi Ambode during the latter's courtesy visit to the governor in Alausa today

The Managing Director of National Inland Waterways Authority (NIWA), Senator Olorunimbe Mamora has stated that there is no fight between the authority and the Lagos State Government over who controls the waterways in the state.

This is just as he also said that the issues such as revenue drive, right of way and sensitisation and advocacy for waterways users would be addressed.

Mamora stated these when he and his NIWA team paid a courtesy visit to the Governor of Lagos State, Akinwunmi Ambode at Alausa, today.

The Managing Director of NIWA, who was accompanied by the Lagos Area Manager of NIWA, Muazu Sambo and other bigwigs, told the governor that he and his team are here to chat the way forward on the issue of inland waterways in the state and how to serve the people better.

He said that his friend in the media have been asking to know what he would do as the new Managing Director of the authority to resolve the fight between NIWA and Lagos State as it concerns water transportation in the state and that he has always told them that there is fight between the two . * Third from left The Managing Director of NIWA, Senator Olorunimbe Mamora and Governor of Lagos State, Akinwunmi Ambode and other officials of both NIWA and Lagos state

“We are here to see you so that we including you can raise the bar. We are not here for ourselves but for the people. We will resolve the issues amicably. I have told them that I am going to start from the top down.”

He told the governor that he and the Commissioner for Transportation had an informal discussion on the issues, adding that today NIWA has come to make it official by paying courtesy visit to the governor.

In his words, “I can say that the wetting of the ground have stated with the informal discussion he had with the Commissioner for Transportation.”

Some of the issues raised with Governor Ambode include: revenue drive, waterways infrastructure and sensitisation and advocacy for waterways users.

Mamora, who was the former Speaker of the Lagos State House of Assembly, stated that NIWA had been able to sensitise waterways users and operators on the need to act in accordance with the Waterways Code.

He disclosed that most time the accident which occurred on the waterways were due to largely failure by users to comply with Waterways Code such as overloading, operating boats at night(night sailing) , failure to wear life jacket among.

NIWA, he stated had reached out to operators, waterway users and communities as part of its sensitisation efforts at making the water transportation safer in the state.

Responding, Ambode said he is in total support of the measures the NIWA Managing Director is employing to address the issues raised.

“I give my total support irrespective of the legal tussle between the NIWA and Lagos State. I give my commitment and support. I have given the go ahead to my officers to go ahead and sit down and address the grey areas.”

“It is a great delight to welcome back home our distinguish Senator and former speaker of the Lagos State House Assembly. We have been planning to have this meeting but we have not been able to but thank God we are having it today.”

He continue, “We were very happy when we heard about your appointment and we know that it is divine.”

Be the first to comment on "Water Transport: NIWA Is Not Fighting Lagos State—Mamora"