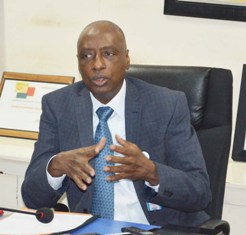 Fire men under the auspices of the Aerodrome Rescue and Firefighting Services (ARFFS), Federal Airports Authority of Nigeria(FAAN) will now heaved a sigh of relief, as they are no longer expect to travel to Cameroun for fire simulation, following the commencement of installation of fire simulator at the Nigerian  College of Aviation Technology(NCAT), Zaria this year

This was disclosed by the Rector of NCAT, Capt. Abdulsalami Muhammed in an interview with the League of Airport and Aviation Correspondents (LAAC) in Zaria yesterday.

He stated that the simulator, which is built in built in the United Kingdom(UK) would be installed in Zaria this year, adding that with the installation FAAN fire men who hitherto travel to neighbouring country Cameroun would no longer go there.

According Muhammed, “We also have another simulator that is being installed in Zaria for this year. The simulator is for firemen. It is automatic fire simulator. As you may be aware, we have never had fire simulator in Nigeria in spite of the number of firemen that we have in this country, all these years, we have been sending our firemen to Cameroon for training. So, this administration felt it is more economical for us to have our own simulator here in Nigeria and this decision was taken to house it here because we have the land. The simulator is being built in the United Kingdom.” He continued, “As you know, the Federal Airports Authority of Nigeria (FAAN) has gotten firemen in every airport and you can imagine the number of firemen that require training and retraining. We also expect people from the Federal Fire Service to make use of this simulator. We also intend to incorporate some of our cabin crew training into the use of this simulator because you can simulate cabin fire, cabin smoke, lavatory smoke and the likes with this equipment. It is very ideal for us to have it here in Zaria.”

On how far NCAT gone to reclaim its land that was encroached on , the Rector stated that the issue was a serious one ,which has led to a legal battle between the school and those who encroached on the college’s land

In his words, “This is a thorny issue for us; when this administration came into power, we approached the Governor of Kaduna State, Mallam Nasir  el-Rufai on this issue and he swung into action with the officials of Kaduna State Urban Development Authority, which came into the area and started marking the houses for demolition, but these illegal occupiers ran to the court and got court injunction to stop the government and you know how our legal system works.

“Right now, we are still fighting it, it’s a legal battle. There is nothing else we can do for now until the court determines the real owners of the land, but we are very confident that this issue would be resolved very soon, “  he added. Speaking on the aircraft acquisition, the NCAT Chief Executive Officer stated that the relocation of Diamond Aircraft Company, which was bought over by another company and relocated from Austria to Canada affected the delivery of the Diamond aircraft for training for the college ordered.

He added that the Federal Government had approved the purchase of 20 for the school.

“The approval we have from the government is to acquire 20 Diamond aircraft; five of which are the two engines DA42 and 15 assembly engine DA 40 aircraft. When I assumed office in 2017, we took delivery of one DA 42 aircraft in the April of 2017.The college placed orders for additional aircraft, but we were informed by the contractors that the Diamond Aircraft Company was bought over by another company and that new owner decided to relocate the production place from Austria to Canada and they told us that they won’t be able to produce another aircraft until nine to 10 months, which is when the assembly line would have been completely relocated. That is what affected the delivery of the additional aircraft because we asked for additional four DA 40 aircraft, which is what we have on order now. That company is up and running in Canada now and we are expected to take delivery of those four DA 40 aircraft before the end of this year.”

“ We also have additional DA 40 aircraft that was given to the college by an insurance company as part from an insurance settlement. So, by the time we have the four aircraft delivered, we will have one DA 42 and five DA 40.

Presently, we have eight aircraft that are serviceable. These aircraft are not the same, we have the basic, advance and two engines ones. So, depending on the stage of training of students, some of the aircraft that are serviceable may not be useful to students for instance, who are starting afresh that need the basic and less complex aircraft and then they advance to more complete aircraft, with more instrument flying, before they now go into the multi-engine aircraft.”

Be the first to comment on "NCAT Completes Installation Of Fire Simulators This Year—Muhammed, NCAT Rector"