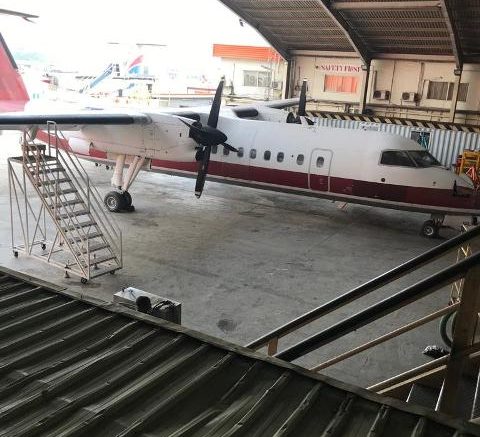 * The disputed aircraft at Aero Hangar

There is no end in sight in the legal battle between Topbrass Aviation and Seagold Investment Limited over the alleged continuous tampering of the former’s aircraft two Dash-8 Q-300s with registration number 5N-MSN 61TBB with 3 and 5N-TBC with MSN 614 by the latter.

Justice Hassan ruled that all parties must be represented at the adjourned date or he will issue a bench warrant as the case was a quasi-criminal trial and those served needed to be present for the hearing.

Speaking to journalists on the matter, Iyayi stated that his Attorney wrote to the Federal Airports Authority of Nigeria (FAAN), the Nigeria Civil Aviation Authority (NCAA) and the Nigerian Airspace Management Agency (NAMA) informing them of the court order by way of motion that the two aircraft under dispute parked at the General Aviation Terminal (GAT), Murtala Muhammed Airport (MMA),Lagos should not be tampered with.

He stated that despite the order, FAAN allegedly released the aircraft to Captain Baba Muhammed, who claimed to be representing SeaGold,a leasing company adding that Baba Muhammed is also aware of the subsisting order and that it was served on all the parties to the dispute.

He alleged that as at today the aircraft have been taxied to Aero Contractor hangar also at GAT, where the registration number was removed.

The TopBrass boss also alleged that the brake unit and the propellers have been removed from the aircraft were being changed, adding that when this was going on he drew the attention of the Managing Director of Aero, Capt. Ado Sanusi but that he denied it despite the fact that it was obvious.

He alleged that at Aero the engine of the aircraft was removed and that Aero in connivance with Capt. Baba Muhammed are planning to bring in another engine in preparation to ferrying the aircraft out of the country.

As at today pictures are being sent to us on what is going on at Aero and we are taking that again as further affidavits to court, to tell the court that despite the fact that we had a sitting two days ago, which would have been a contempt proceeding sitting, they are still tampering with the aircraft at Aero Hangar which is in violation of the order. we are going back to court with all the evidence because it is not good enough to speak, the idea is to show evidence. And indeed anytime we filed in court we have shown photographic evidence.”

“As I speak, 30 minutes ago, someone under the aircraft told me they had removed the propeller from one of the engines, the engine stand was there with the view of changing the engine. Two weeks ago, the brake unit of this aircraft was removed and replaced, all of these reports were given to me and continue to be given to me by Aero Contractors staff, working on the aircraft.”

He continued, “We actually approached the courts when all these were happening to ask for an exparte order that the aircraft be taken away from Aero hangar, possession of aircraft taken by the police, the IGP, AIG Airport and Commissioner of Police Airport, to take physical possession of the aircraft, secure it at a location at the airfield and report to the court about the security and safety of the aircraft pending the determination of the case. But the judge felt since there was going to be the contempt proceeding in two days time, felt there was no need to do that and felt the contempt proceeding will deal with it.”

Speaking further, he said, “This contrary to the court order which says that the parties to the dispute shall not tamper with the aircraft. This is a breach. People do things they way they feel not withstanding what the law says. This is not good for the industry. This is why this development should be brought to the public to save our investment.”

Iyayi disclosed that on January 15,2019, a Federal High Court presided over by Justice M. S Hassan was supposed to hear the contempt case brought against the Director General of NCAA, Capt. Usman Muktar and the Managing Director of the Federal Airports Authority of Nigeria(FAAN), Engr. Saleh Dunoma but that two of them were absent in court.

He added that as a result of their absence the trail judge issue summon on both Capt. Muhtar and Engr. Dunoma to present in court on February 28,2019, adding that the Judge extracted assuring from the lawyers of both NCAA DG and that of FAAN MD; that their clients would be present on the appointed date.

“What they are being tried for is quasi criminal offence,” he said.

On the role of the Minister of State, Aviation, Senator Hadi Sirika, Iyayi stated that he had confronted him on the matter but that the minister did not deny knowledge of the issues.

In his words, ”The court order was also served on the Honourable Minister and the Minister cannot say he is not in the know.

Attempt by AbelNews get the official reaction of the Managing Director of Aero Contractor, Capt. Ado Sanusi failed as he could not be reached.

However, a source close to the airline told the airline platform that when the owners of the disputed aircraft brought the machine for repairs and in the course of repairing it an order came from the court that Aero should stop work on the aircraft and that Aero had since obey the order of the court.

The source added that Aero is not interested in the aircraft and that if Aero had its way it would remove the aircraft from its hangar but it cannot do because of the court order that order that states that parties to the dispute must tamper with the airplane.

The source further told AbelNews that as it is today , the disputed aircraft is prevent Aero’s clients from bringing their aircraft to the hangar as it is occupying space which its clients would have used for their airplanes.

Aero, the source said would want the case to decided speedily and that whoever wins the case so be it.

Also, the General Manager, Public Relations, NCAA, Mr Sam Adurogboye could not be reached to state the regulatory body’s side of the story.