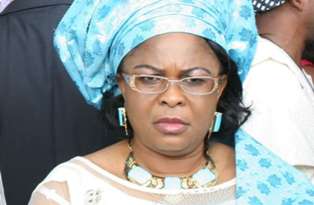 A Federal High Court sitting in Lagos today,, fixed February 11, 2019 for judgement in an application filed by the Economic and Financial Crimes Commission, EFCC, for the final forfeiture of the sums of $8,435,788.84 (about N3 billion) and N9.2 billion (totalling about N12.2 billion), linked to former first Lady,  Patience Jonathan, believed to be proceeds of illegal activities.

The court had, on April 19, 2018, ordered an interim forfeiture of the money, following an ex-parte application filed by the EFCC against Patience Jonathan and some companies.

The money was said to be warehoused in some banks, including Skye Bank Plc (now Polaris Bank Plc), Diamond Bank Plc, Stabic-IBTC and First Bank Plc.

During the last adjourned date on Tuesday, January 15, 2019, five video clips of companies belonging to the former First Lady were shown to the court.

After viewing the videos, counsel to the applicant, Rotimi Oyedepo, informed the court that he was not served the video of the Women for Change Initiative and two others by the defence, team, a claim that was confirmed by the court. During yesterday’s proceedings, Oyedepo was served some applications pertaining to the video evidence played in the court.

In his response to the application served on him at yesterday’s sitting by the respondents, Oyedepo informed the court that a sum of N1billion that the Women for Change Initiative paid into the account of the fifth respondent, Pagmat Oil and Gas Limited, was inaccurate.

He said investigations showed that tax was not paid to the Federal Inland Revenue Service, FIRS.

“If it was an income as stated by the respondent, tax would have been paid,” he said. He also told the court that first respondent controlled the accounts of the third to the sixth respondents, as she was the sole signatory to all the accounts. He, therefore, urged the court not to strike out paragraphs nine to 12 of his further response affidavit.

In her short ruling, Justice Olatoregun allowed the further affidavit filed by the applicant, stating that she had found no reason why those paragraphs should be expunged.

In his further response to the counter-affidavits filed by the respondents to his motion for final forfeiture of the monies, he told the court that the first respondent breached the trust of the Constitution establishing the Women for Change Initiative that says “a fund should not be transferred to any of the members that has interest in the company”.

Oyedepo further stated that it was an unlawful act to induce men and women to make donations only to end up converting same to personal use.

“My lord, the first respondent never disclosed any of the sources that made the donations. Instead, she signed the cheques, using other people’s names and passport photographs for various transactions and conversions of funds. The two men who are signatories to the second respondent’s account are at large. The funds traced to the accounts are all cash payments in dollars given to a steward in the State House to pay into the accounts, using fictitious names,” he further submitted.

He also brought to the notice of the court that after the court had earlier struck out the initial application to forfeit these funds, the third to the sixth respondents issued instructions to the various banks where the money was to be forfeited, informing them to transfer the money to different banks.

He told the court that the receipt brought by the respondent was an attempt to “pull wool over the court’s eye. There was no name, address, phone number on the receipt of the money paid into the accounts of the third to the sixth respondents.

“Some of the people who deposited the money had written to the EFCC that they did not buy anything, but that they were given dollars, which they changed and converted to Naira and paid into those accounts.” He, therefore, passionately urged the court to forfeit the funds and to place reliance on all the EFCC exhibits before the court.

“My lord, the respondents have not shown cause that the funds are legitimate,” he submitted.

Be the first to comment on "Court Fixes February 11 For Judgement In N12.2 B Linked To Patience Jonathan."