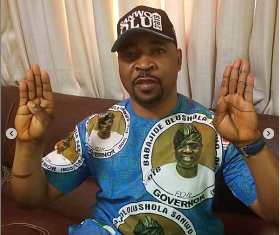 It was confusion galore yesterday during the inauguration of the campaign of the All Progressives Congress (APC) at the Sky Power Ground, Oba Akinjobi Road, Ikeja, Lagos, following the invasion of the venue by hoodlums shooting sporadically at their perceived enemies.

One of the leaders of National Union of Road Transport Workers (NURTW) Musiliu Akinsanya, aka MC Oluomo, was allegedl stabbed during the clash between two factions of the NURTW.

Others who were shut during the fracas are the Group Political Editor of The Nation, Emmanuel Oladesu; a correspondent with New Telegraph, Temitope Ogunbanke; and a cameraman with Ibile Television, Abiodun Yusuf.

The two NURTW factions were fighting a supremacy battle at the venue of the rally which began at about 12.45 am, which later ended abruptly.

It was gathered the hoodlums suspected to be supporters of MC Oluomo and another union leader Mustapha Adekunle, aka Seigo, invaded the rally ground with guns, daggers, cutlasses charms and other very dangerous weapons to execute their missions.

At the rally, the two factions were seen attacking one another with cutlasses, while those, who came for the rally proper including party big wigs ran for cover

Gunshots could be heard from all corners just as the state Governor, Akinwunmi Ambode, delivered his speech, asking that maximum support should be given to APC governorship flag bearer, Babajide Sanwo-Olu in the coming governorship election.

He was escorted out of the venue and was joined by the Deputy Governor, Idiat Adebule, and the APC governorship candidate, Mr Babajide Sanwo-Olu,who due to the intensity of the gunshots was unable to present his speech.

At this point, confusion reigned supreme, as people were seen running for cover for fear of been hit by bullets.

According to her, “Two suspects have been arrested.”

Oti stated that the fracas was started by Seigo, who according to him had been declared wanted by the command and that MC Oluomo has been rushed to the EKO Hospital, Ikeja, for medical attention.