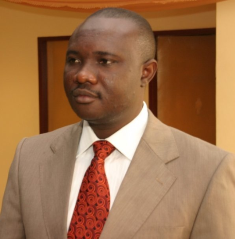 The trial of the Executive Director of Niger-Delta Development Commission (NDDC) Engr. Tuoyo Omatsuli, who was charged on alleged N3.654 billion fraud, before a Federal High Court, Lagos, was today adjourned till February 11.

At the resumed trial of the matter today, defendants’ counsel, Mr. Norison Quakers (SAN), told the court that though, he is ready for trial of the matter, but added that one of his clients, the third defendant, is yet to be released by the EFCC despite fulfilling all the bail conditions granted him by the court.

But in a swift response, EFCC counsels, Ekene Iheanacho and George Chia-Yakua, told the court that the Commission is yet to get clearance from the Bureau of Lands which the defendant’s surety claimed to be working.with.

The EFCC lawyers said: “it’s true that the defendant had submitted all the documents for his bail, we have confirmed the title documents from the Bureau of Lands.

“However, we just received a letter dated December 31, 2018 from the Ministry where the surety claimed to be working that our letter have been forwarded to the the appropriate quarters for reply. This we have communicated to the Senior Counsel”.

Following the submission made by the EFCC lawyer, Justice Saidu while counselled the defendant’s lawyer to work on perfecting the bail terms, adjourned the matter till February 11, for commencement of trial.

They had pleaded not guilty to all the counts and admitted to bail.

It would be recalled that the EFCC got a temporary order from Justice Chuka Obiozor of the Federal High Court, Lagos to seize some properties worth N1.8 billion allegedly belonging to Tuoyo Omatsuli.

Counsel to the applicant, Ekele Iheanacho, had detailed how a contractor with the NDDC, Starline Consultancy Services Limited, was paid N10.2 billion as consultancy fee for levies collected from oil processing companies in the Niger Delta Region.

He further said that out of the money paid to Starline, N3.6 billion was paid as kickback to Omatsuli through a company named Building Associates Limited.

Iheanacho also told the court that one Francis Momoh, described as the majority shareholder in Building Associates Limited, was introduced as a shareholder in Don Parker Properties Limited so as to disguise the nature of the crime.

Be the first to comment on "N3.6B Fraud: Trial Of Ex-NDDC Director, Omatsuli, 3 Others Fixed For Feb. 11"