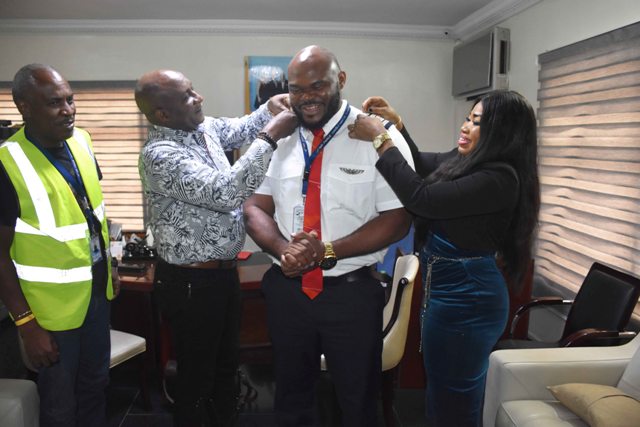 This just as the airline assured its staff that it would continue to reward excellence and hard work.

Decorating Capt. Wisdom Isangadighi at Air Peace Corporate Headquarters in Lagos, the Chairman/Chief Executive Officer of the airline, Mr. Allen Onyema, said he was pleased that the carrier was fulfilling its goal of servicing un-served and underserved domestic and regional routes under its subsidiary, Air Peace Hopper.

He assured that the airline would extend its operations to the Murtala Muhammed Airport 2 (MMA2), Lagos beginning from January 2, 2019 was strategic to delivering on the carrier’s no-city-left-behind project.

Air Peace recently announced that it was extending its operations from its hub at the General Aviation Terminal (GAT) of the Murtala Muhammed Airport, Lagos to MMA2. The airline said it would move its Lagos-Akure, Lagos-Asaba, Lagos-Kaduna and Lagos-Port Harcourt NAF Base services to MMA2 from January 2, 2019.

Onyema congratulated Isangadighi on making history as Air Peace’s first decorated Embraer 145 captain, urging him to continue to work hard to deliver the best service to the airline’s customers.

The Air Peace boss, who performed the decoration together with the carrier’s Chief Operating Officer, Mrs. Oluwatoyin Olajide, Chief Pilot, Capt Victor Egonu and Head of Training, Capt Nduduisi Ekwempu, urged pilots to sustain the airline’s strict safety standards, insisting that there was no room for shortcut and unprofessional practices in the aviation industry.

Speaking shortly after his decoration, Capt Isangadighi expressed happiness that his childhood dreams of taking to the sky were being fulfilled.

He described his experience flying as exciting, assuring that he would continue to prioritise safety and professionalism in his flight duties.