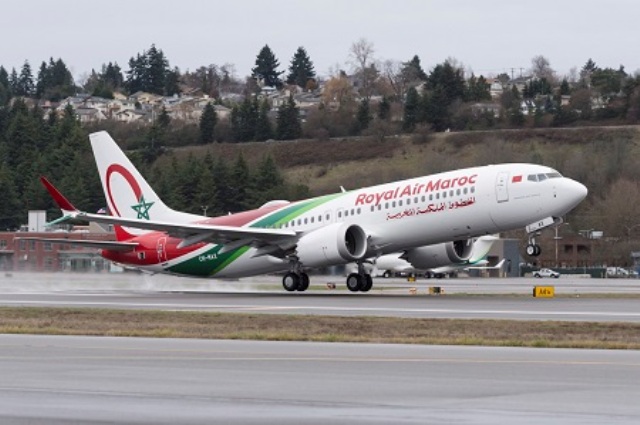 Boeing said today that it has delivered the first 737 MAX for Royal Air Maroc, which plans to use the fuel-efficient, longer-range version of the popular 737 jet to expand and modernise its fleet.

Morocco’s flag carrier – which welcomed its first 787-9 Dreamliner last week – will take delivery of three more 737 MAX 8s and three more 787-9s over the next few months as part of its strategic plan to strengthen its operations.

Speaking on the development, The Chief Executive Officer and Chairman of Royal Air Maroc, Abdelhamid Addou, said, “We are pleased to receive our airline’s first 737 MAX, which will soon be joined by three other airliners from the same family. These new 737 MAX airplanes expand our medium-haul portfolio, which forms the backbone of Royal Air Maroc’s fleet. Our choice of this airplane is in line with our strategy of continuously expanding and modernizing our fleet, and comes just a few days after the announcement of Royal Air Maroc’s invitation to join the most prestigious Oneworld Alliance. This in turn will further strengthen our leadership position on the continent, both for our country and for Royal Air Maroc.”

The 737 MAX 8 airplanes will build on the success of Royal Air Maroc’s fleet of Next-Generations 737s.

The MAX incorporates the latest technology CFM International LEAP-1B engines, Advanced Technology winglets, and other airframe enhancements to improve performance and reduce operating costs and it also integrates engine technology to reduce the operational noise footprint of the airplane.

Compared to the previous 737 model, the MAX 8 can fly 600 nautical miles (1,112 kilometers) farther, while providing 14 per cent better fuel efficiency.

According to the Senior Vice President of Commercial Sales & Marketing for The Boeing Company, Ihssane Mounir, “Royal Air Maroc plans to deploy its 737 MAX 8 on routes from Casablanca to Accra (Ghana), Lagos (Nigeria), London-Heathrow (England), Bologna (Italy) and Paris (Orly and CDG). With the 737 MAX and 787 Dreamliner, Royal Air Maroc will now operate the most capable airplane in the narrow body and medium widebody segments. It’s an unrivaled combination of efficiency and performance that will allow the airline to profitably grow its network and business.”

“We are thrilled to celebrate two major milestones this month with our long-time customer Royal Air Maroc. Over the past five decades, we have been honored to see them grow on the wings of Boeing airplanes and we are very excited to see the next chapter of our partnership,” he said.

Boeing has also partnered with the industrial sector in Morocco, supporting the development of the kingdom’s aviation industry through initiatives such as the joint venture MATIS Aerospace that specializes in producing wire bundles and wire harnesses for airplanes. Boeing is also helping to educate local youth through partnerships with EFE-Morocco and the INJAZ Al-Maghrib association.

The 737 MAX is the fastest-selling airplane in Boeing history, accumulating about 4,800 orders from over 100 customers worldwide. For more information and feature content, visit www.boeing.com/commercial/737max.