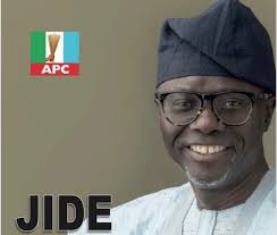 The Lagos State Commissioner for Home Affairs, Dr. Abdul Hakeem Abdullateef has advised Lagosians to vote for Mr. Babajide Sanwo-Olu, candidate of the All Progressive Congress (APC), as Governor of Lagos State in the forthcoming 2019 election.

The essence of the mobilisation is to ensure that the lofty, progressive and time-tested policies and programmes started in 1999 during the regime of Asiwaju Bola Ahmed Tinubu, to Raji Fashola and Mr. Akinwunmi Ambode can continue.

Dr. Abdullateef gave the advice while speaking to the massive gathering at the rally organised by the Itesiwaju Eko Foundation in Ejigbo Mini-Stadium, Oshodi-Isolo in Lagos, at the weekend, to mark the first year anniversary of the Foundation.

The leader of the group, Abdullateef, said the main purpose of the rally was to show that the Lagos State Governor , Mr. Akinwunmi Ambode, along with his entire cabinet members and millions of APC members, remains resolute in their commitment to ensure the emergence of Babajide Sanwo-Olu as the Governor of Lagos State, in 2019.

The commissioner said, “Following the achievements of the past administrations and the need for the governing party, APC, to continue the giant stride of development across the state, it has become imperative that we elect Mr. Sanwo- Olu, to continue the implementation of the master template that has started since 1999, the unprecedented development and infrastructural growths, that has put Lagos in the driving seat among other states in the country “.

The commissioner urged Lagosians, to elect Mr. Sanwo-Olu and all other APC candidates vying for electives positions in the state, adding that Lagosians could not afford to experiment by electing those that would enslave and bring the state down, while proclaiming, ironically, freedom as their unique selling point.

“Today is a special rally for Mr Babajide Sanwo-olu. We want to tell the whole world that the entire Lagos state cabinet is resolutely behind Mr. Akinwunmi Ambode in this objective”.

Abdullateef, who is also the Director of Conflict Resolution of Babajide Sanwo-Olu Independent Campaign Organisation, called on all aggrieved members in APC to work together and ensure victory at the polls for not only Mr. Babajide Sanwo-Olu, but also all the 40 members who would be representing the good people of the state “as their voices and eyes” in governance.

He advised all members to reconcile their differences and show their usual high motivation to further promote the interest of the party.

He further advise that people should not be distracted by the recent happening in the state political circle where one of the cabinet members of Governor Mr. Ambode left the party.

“As one member left we are mobilising thousands and millions. The absence of one member will not affect the standing of our great Party; nobody should make attempt to destroy the good works of governor. Ambode is fully with Sanwo-olu, and nobody should misrepresent what is happening in government, as sign of weakening”.

He enjoined Lagosians, and indeed all Nigerians, to support APC candidates at all levels.

According to the commissioner, “Today, the greatest problem of the Nigerian government is the uncooperative attitude of the National Assembly. We need a National Assembly that would be on the same page with the Federal Executive Council to move the country forward, just as we will continue to thrive in Lagos, if we continue to elect all APC  aspirants to represent us in the State House.

“If you vote for Sanwo-Olu and you do not vote for APC as members of the House of Assembly, you have not voted for Sanwo-Olu because the legislature is the apex institution and the most important organ of government. In the same vein, at the National level, if anybody says I want to vote for only Buhari and he votes for others not on the platform of the APC, then he has not voted for Buhari.”

The commissioner stressed that past government in the Lagos State had succeeded as performing governors and Babajide Sanwo-Olu would not be an exception. APC “remains in fact more united and formidable than ever before, and I want to assure you that we are mobilising thousands and millions of Lagosians in favour of our candidate.

He promised that his Foundation, as well as millions of other party faithful would continue to mobilise for Sanwo-Olu and APC.

In his on contribution, the member representing Oshodi Isolo constituency, Mr. Jude Emeka Idimogu, said APC would always remain strong, as all party members “are in agreement” that party’s position should be paramount and individual interests should be secondary.

He promised that all Lagosians, irresponsible of ethnicity, religion or status would mobilise and vote for APC in the coming election.

While fully in support of Mr. Babajide Sanwo-Olu’s election, he praised the efforts of the APC National leader, Asiwaju Bola Ahmed Tinubu and said all members of the party “are fully with the APC Nation leader and they cherish his wisdom, knowledge, experience and direction. This is a man who has always been there for Lagos and has never failed”.

Honourable Idimogu also commended the efforts of the leader of the Foundation, Dr. Abdul Hakeem Abdul Lateef, “who continues to improve the capacity, empowering thousands of people, motivating his constituency and energising them for effective and fruitful participation in governance”.

The rally was witnessed by people from Oshodi-Isolo Constituency and Ejigbo environs, who trooped out in their large numbers to show solidarity, unity and commitment to the party.

Be the first to comment on "2019: Lagos Commissioner Mobilises Massive Support For Sanwo-Olu"