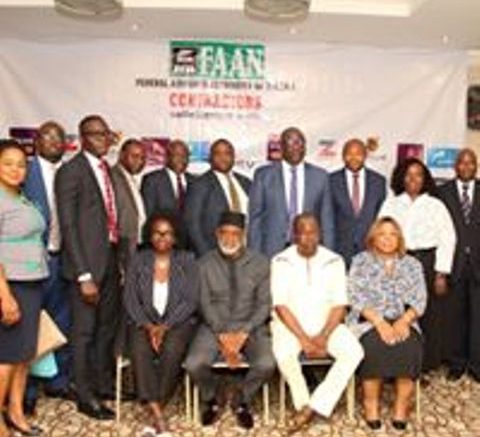 * The Representative of the Managing Director of FAAN and Director of Engineering Services, Engr. Salisu Daura(3rd from left),Director of Finance and Accounts, Mrs. Nike Aboderin (4th left), other FAAN officials and some bankers at the event.

…Says It Is Credit Worthy

The Managing Director of the Federal Airports Authority of Nigeria (FAAN), Engr. Saleh Dunoma today stated that the agency would collaborate with its banks and contractors to develop aviation infrastructure and take FAAN to the next level

This is just as he disclosed that the agency has completed audit of its 2015 and 2016 financial statements, adding that of 2017 management accounts was on and would be concluded shortly.

In his words, “We have concluded on the audit of our 2015 and 2016 financial statements and of our 2017 management accounts is still ongoing and will be concluded shortly.”

He stated this at the Collaboration Meeting Of Contractors and Commercial Banks organised in Lagos by the agency to engage both parties.

The collaborative, he noted would be of tremendous benefits to all parties involved.

Dunoma stated the gathering was in line with the Federal Government’s innovative step at ensuring and encouraging better access to funding especially for Small and Medium scale Enterprises (SME’s) and others, to deepen opportunities for Gross Domestic Product (GDP) growth and diversify our economy.

He noted that aviation Industry is highly technical and capital intensive, adding that the sector in recent past has undergone incisive and extensive transformation aimed at making Nigeria airports comfortable, safe, secure and conducive for commercial purposes. The FAAN Managing Director, who was represented by the Director of Engineering Services, Engr. Salisu Daura said that achievements to date would not have been possible without support from stakeholders

He added that the objective of the Collaborating Meeting programme is to develop a financing mechanism, which optimises the cash flow of FAAN and at the same time provides the much-needed support to its contractors, to enable them access opportunities for working capital enhancement.

The scope, he said involves working with selected financial institutions to provide liquidity to its major FAAN contractors, through direct and contingent funding

On where the agency are at the moment, Daura stated that as at “November 2018, we have seen marginal increase in our Aeronautical revenue compared to the same period in 2017.”

According to him, “A few collective and collaborative efforts have been embarked upon and several measures have been put in place to improve revenue generation and collection.”

Speaking further, he said, “Our revenue lines are growing, we are putting processes and systems in place to enhance efficiency, optimize our human capital and enhance our services delivery around all our airports. Though there is room for improvement we remain committed to our mission and to meeting all our obligations to our various stakeholders.”

Also, speaking, the Director of Finance and Accounts, Mrs. Nike Aboderin, said that FAAN is credit worthy and that the agency would work with its banks and contractors to ensure the project succeeds.

FAAN, she said has thousands of Small and Medium Enterprises (SMEs), adding that the collaborative meeting is just a pilot project and that agency was watching how the project would go before inviting others.

She commended the contractors and Banks for their support and hoped that they would continue to support FAAN, adding that the relationship would not end with organising this programme.

Meanwhile, Otumba Oyeleke  Atoyebi , who spoke on behalf of the contractors , appealed to FAAN to treasure banks present that it is credit worthy .

Banks on their part stated that they are ready to provide funds to contractor to execute projects in the industry, provided the contractors have track record of meeting its financial obligation.

They added that they are willing to engage contractors one -on –one.

Be the first to comment on "FAAN Collaborates With Banks, Contractors To Develop Aviation Infrastructure"