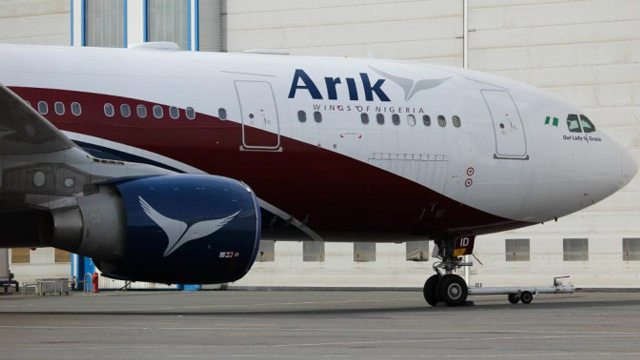 An online statement issued by the PR & Communications Manager, Adebanji Ola explained that the suspension of flights to these airports and MMA2 terminal followed the Federal Airports Authority of Nigeria (FAAN) notification to airlines of its withdrawal of services to these facilities

Adebanji further explained that a Notice To Airmen (NOTAM) issued on Saturday, December 8, 2018, by FAAN stated that it would be withdrawing Aviation Security (AVSEC), fire fighting and rescue operations from Osubi, Gombe and MMA2 from midnight of Sunday, December 9, 2018.

“Consequently, Arik Air will be suspending its flights to Osubi Airport, Gombe Airport and move Port Harcourt flights out of MMA2 from Monday, December 10, 2018 until further notice.

The statement added that Arik Air regrets any inconvenience the closure of the three airports may cause its esteemed customers, hoping that the issue between FAAN and the airport authorities will be resolved soonest.

Be the first to comment on "FAAN Withdrawal Of AVSEC Service Forces Arik To Suspend Flights To Gombe, Osubi, Warri, Airports, MMA2 Terminal"