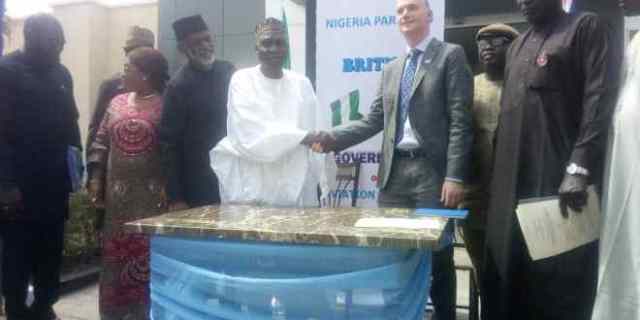 … Says Facility Will Contribute To AVSEC Development In W/Central Africa

…As FAAN Signs MoU With British Govt. On AVSEC

The Managing Director of the Federal Airports Authority of Nigeria(FAAN), Engr. Saleh Dunoma has stated that the international Civil Aviation Organisation(ICAO)certified FAAN Aviation Security Training Centre(ASTC) would not only contribute to the development of AVSEC but that it would also improve  security in the West and Central Africa(WACAF) Sub-Region.

He said this while speaking with aviation journalists at the commissioning of the FAAN AVSEC Training Centre today at the international wing of the Murtala Muhammed Airport (MMA), Lagos.

Dunoma added that inauguration of the Training Centre is to compliment the overall efforts of ICAO in improving AVSEC in the West and Central Africa sub –regions.

The FAAN boss commended ICAO, Nigerian Civil Aviation Authority (NCAA) and the Nigeria College Aviation Technology (NCAT) for the contributions towards making the training centre a reality, adding that the commission of the facility would further help the agency to train more agency staff compared to when they go outside the shores of the country for training.

He stated that with the certification of the school by ICAO, it would further bring about patronage from the civil aviation personnel from WACAF regions.

Also speaking, the Director General of NCAA, Capt. Usman Muhtar, commended ICAO for endorsing the school after a successful evaluation process which proved that FAAN Aviation Training School was ready to contribute to the ICAO global aviation security training programme.

He stated that the request for the designation of FAAN AVSEC Training School as an ICAO Aviation Security Training Centre(ASTC)was made on the June 18,2017, after which an evaluation by ICAO was conducted in May 2018 by the Regional Security Officer for Western and Central Africa office and that under 24 months , the request was granted.

The NCAA boss stressed that the reason for the request for an ASTC was purely for the provision of AVSEC Training Courses to cater for the English speaking states in the West Africa sub region.

ICAO on its part commended the Federal Government , the significant efforts made by the Director General of NCAA, the Managing Director of FAAN, managers and the technical staff of the school, which has resulted to high achievement that is been celebrated today.

ICAO commended the Federal Government and others through the ICAO Regional Director, Mr. Mam Sait Jallow ,during the inauguration of the training facility.

He added that with the designation of the ASTC of Nigeria, the network of AVSEC Training Centres now include 35 centres wisely distributed in all ICAO regions to provide AVSEC training at the international, regional and national levels, to all categories of personnel involved in the implementation of security measures, policies and procedures in line with its strategic objectives to improve the level of implementation of Annex 17 Standards.

Meanwhile, the Federal Government through the FAAN has signed a Memorandum of Understanding (MoU) with the British Government on Aviation Security.