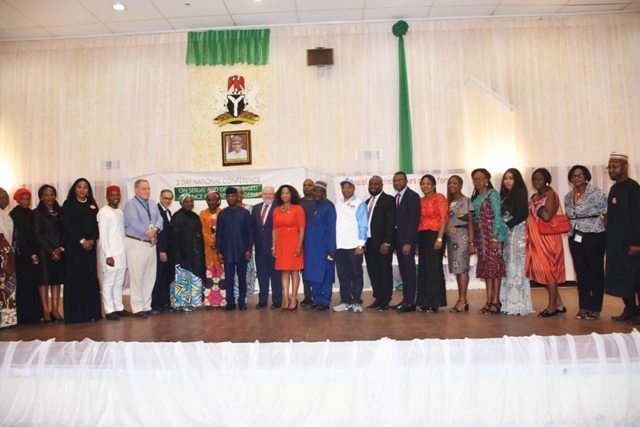 Vice President Yemi Osinbajo has commended West Africa’s leading carrier, Air Peace and its sister organisation, The Foundation for Ethnic Harmony in Nigeria (FEHN) for their commitment to efforts to at stamping out gender-based violence in the country.

Speaking at the opening ceremony of the National Conference on Sexual and Gender Based Violence Response in Nigeria held at the State House, Abuja on Thursday, Osinbajo, said he was pleased that Air Peace was on board the campaign to protect women, children and other vulnerable members of the society from violence.

The Vice President presented a joint award to FEHN and Air Peace for their partnership with the “government and people of Nigeria on gender based violence.”

The award was received by the Chief Operating Officer of Air Peace, Mrs. Oluwatoyin Olajide.

She pledged that the airline and its not-for-profit organisation, FEHN would continue to seek ways to support the Federal Government in its projects aimed at protecting vulnerable members of the society.

Delivering a goodwill message at the conference, the Assistant Procurement Manager of FEHN, Mrs. Motunrayo Boladale commended Osinbajo and his team for rising in protection of women, children and other vulnerable members of the society through the National Conference on Sexual and Gender Based Violence Response in Nigeria. * Air Peace Chief Operating Officer, Mrs. Oluwatoyin Olajide (left) receiving Vice President Yemi Osinbajo’s award recognising Air Peace and The Foundation for Ethnic Harmony in Nigeria’s support for the campaign against gender-based violence from the Rule of Law Adviser to the Vice President, Dr. Fatima Waziri-Azi during the National Conference on Sexual and Gender Based Violence at the State House, Abuja on Thursday.

She urged strategic action against gender-based violence, saying FEHN and AIr Peace were battling the scourge through training, empowerment of women by tasking them with sensitive positions and creation of job opportunities to take the focus of members of the society from violence and other crimes.

According to her, “The reality of gender-based violence in this age is one that continues to wear frail not only the societal fabric of the African continent, but also the entire world. Unfortunately, in recent years the trajectory of cases of domestic violence, sexual exploitation, early marriage and rape of minors in Nigeria has become rather alarming. Sadly, majority of the victims operate in such vulnerable state that there is the possibility of a recurrence.”

“As conflict reconciliation experts, The Foundation for Ethnic Harmony in Nigeria (FEHN) understands that one of the most effective ways to curb this growing menace is basically the activation of practical proactive measures. Thus, our efforts in the institutionalisation of Nonviolence. FEHN’s training initiatives are designed to empower individuals at every level. We understand that an empowered individual is less likely to indulge in the act of violence or operate in the position of acceptance. We have the training platforms that educate women and children from the grassroots level. One of our training initiatives is  ‘Message to Schools ‘. This programme has had us train several children in primary and secondary schools.

“One of the main reasons our sister company, Air Peace Ltd was floated is to create employment. It is heartwarming to know that we have several women gainfully employed by Air Peace. In fact, most of our managers are women, a mark of the dedication of our chairman, Dr. (Barr.) Allen Onyema to the empowerment of women. We strongly believe that as we all join hands individually and collectively to combat gender-based violence, the lasting success we seek will be ours,” Boladale said.

Be the first to comment on "Fight Against Gender-Based Violence: Osinbajo Hails Air Peace, FEHN"