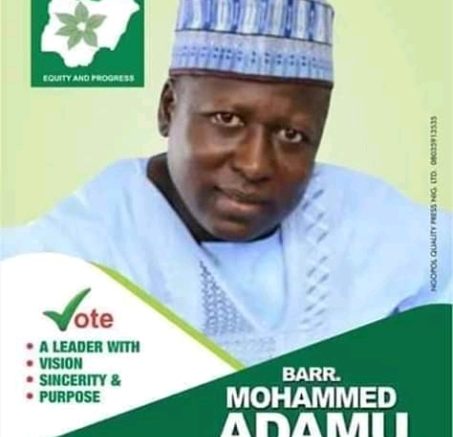 As the political atmosphere and calculations towards 2019 general election hots up, the governorship candidate of People’s Party of Nigeria (PPN), in Nasarawa State, Mr. Mohammed Adamu, is sounding with all certainty of defeating both the ruling All Progressive Congress (APC) and the opposition Peoples Democratic Party, PDP, in the state at the forthcoming poll.

Adamu, a Lagos-based legal practitioner, said with the political situation in the state, the slogan at every campaign rally in the state is “Sai Barrister Mohammed Adamu”.

Speaking on the development, the PPN governorship candidate said, “the people of Nasarawa State are suffering amidst plenty, look at the civil servants, no salary and the little ones paid is paid on percentage basis. Look at our senior citizens, no pension, the insecurity is growing by the day, ranging from armed robbery to kidnapping. No good roads, no hospital, the available ones are without medicine and well-trained medical personnel.”

“You can see, we have a lot of land, but there is no help to the local farmers with agricultural equipment and improved crops. There are orphans and widows everywhere with no help from any direction”.

Adamu expressed fears that if fundamental change does not happen in favour of the people of the state, those that their lands have been forceful taken from them will end up serving various jail terms as he has been witnessed in other parts of the country in the course of his legal practice over the years.

Adamu, who is contesting under the same umbrella with Majors Hamza Al-Mustapha as the party’s presidential candidate, stated that if he emerge as the governor of the state, he would make the State another Center of Excellence in the making.

Parts of the project he planned for the state according to him includes: College of Medical Science for the State owned university in Keffi, a mobile neighborhood security outfit, scholarship for indigent students of the state.

Adamu, who claimed to be an advocate of social justice with the mind of protecting the less privileges in the society said, “as a social analyst with a fair knowledge of labour law, the labourers or workers will be paid their wages and salaries as at when due”.

He also expressed dismay on how some contestants for the governorship seat have never move a single motion while in the State’s House of Assembly.

“How can they now serve the people whom they failed to make a single law to benefit  when they were in the Assembly?”

He called on the electorates in Nasarawa State to conduct themselves peacefully and make sure that they come out enmass to vote for PPN at the next general election.

Be the first to comment on "2019 : Nasarawa PPN Gov. Candidate, Adamu, Vows To Turn State To Center Of Excellence"