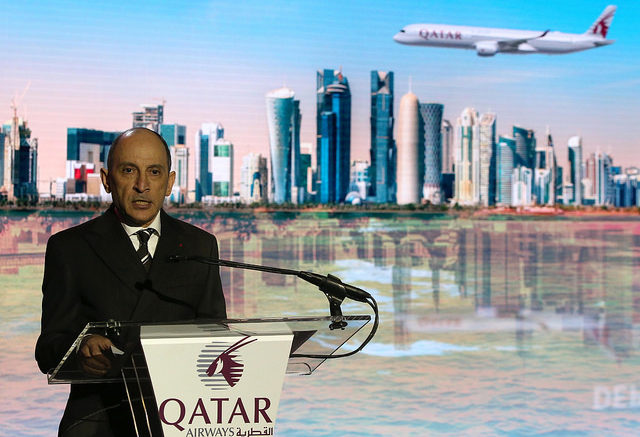 Qatar Airways has hosted a private VIP gala dinner with influential business leaders and political dignitaries to celebrate over a decade of the award-winning airline’s successful service to New York City at the historical and renowned venue Cipriani.

Speaking, the Deputy Prime Minister and Minister of Foreign Affairs of the State of Qatar, His Excellency Sheikh Mohammed bin Abdulrahman Al Thani said, “Congratulations to Qatar Airways on its 10th Anniversary connecting the United States from The State of Qatar. Qatar Airways is a model of what is possible when excellence and determination are the goals. The airline’s philosophy of bringing people together, providing the right for all to travel is more important than ever. Qatar Airways provides a way for Americans and Qataris to travel and offers jobs for thousands of families, helping to grow the economies of both nations.”

Speaking at the gala event, Qatar Airways Group Chief Executive, His Excellency Mr. Akbar Al Baker, said, “Tonight is an exciting one for Qatar Airways, as it is a celebration of more than a decade of serving the people of the United States. We have a very special relationship with the people of New York, as it was our first gateway into this country just over 10 years ago. We are also very proud of the contribution we have made, and continue to make to the U.S. economy as a large portion of American-made aircraft in our fleet are testament to the faith we have in American products.”

He continued, “We also continue to develop strong relationships with our U.S. partners including JetSuite, Boeing, G.E. and Gulfstream. Tonight we reaffirm our commitment to build on the strong relationship we have already established here in the U.S., and to continue to expand our presence here, offering an outstanding product and providing even more choice for U.S. travellers.”

Recalled that in October, Qatar Airways became the Official Global Airline Partner of the NBA’s Brooklyn Nets and the team’s home, Barclays Center, the Brooklyn, New York venue that hosts many of the world’s most exciting entertainment and sporting events. This, according to the airline marks the first major partnership between the airline and an NBA team or venue.

Qatar Airways’ A350-1000, the world’s most technologically advanced passenger aircraft, landed in New York in October 2018, marking the airline’s first U.S. route to operate commercial flights on the ultra-modern aircraft.

The five-star airline is the global launch customer for the innovative A350-1000 aircraft, the latest member of the Airbus wide-body aircraft portfolio.

In December 2017, the award-winning airline launched the ground-breaking Qsuite on direct flights to New York. Qsuite features the industry’s first-ever double bed available in Business Class, with privacy panels that stow away, so that passengers in adjoining seats can create their own private room.

Adjustable panels and movable TV monitors on the centre four seats let colleagues, friends or families travelling together to transform their space into a private suite, allowing them to work, dine and socialise together.

These new features provide the ultimate customisable travel experience that enables passengers to create an environment that suits their own unique needs.

One of the world’s fastest-growing airlines, Qatar Airways currently operates a modern fleet of more than 200 aircraft flying to over 160 business and leisure destinations across six continents.

The airline plans to launch a host of new destinations before the end of 2018, including Gothenburg, Sweden; Mombasa, Kenya and Da Nang, Vietnam.