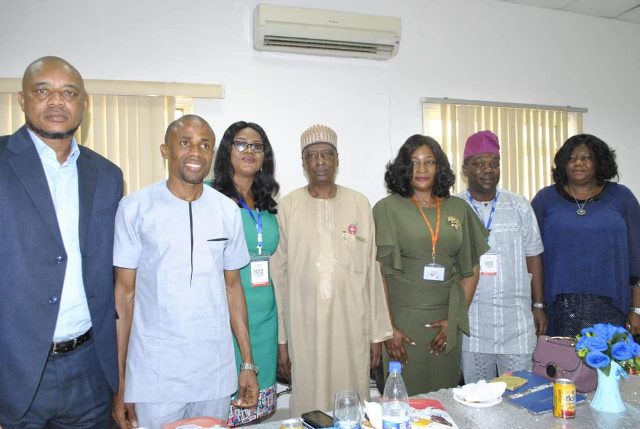 … Cabin Crew Fair To Now Hold May 31 Every Year

The Chairman of Air Peace, Allen Onyema has called on aviation stakeholders ,which comprises of airlines, aviation agencies, ground handlers and other aviation related entities to come together to discuss how best to raise the bar in the Cabin Crew profession.

He stated that Cabin Crew had done well in the area of safety and comfort but that in customers’ service they are sliding, adding that Cabin Crew is one of the critical aspect of aviation .

This is just as he called on them to concentrate on customers service and also build confidence in the process of carrying out their duties..

He said this while delivering the keynote address at the Cabin Crew Fair 2018 with the theme: “Raising The Bar Of The Cabin Crew Profession” held today at the Nigerian Civil Aviation Authority (NCAA)Annex, Murtala Muhammed Airport(MMA),Lagos.

Onyema, who was represented by the General Manager, Corporate Communications, Air Peace, Mr Chris Iwarah, said that Cabin Crew has a very vital role to play in ensuring that passengers are safe and comfortable throughout the flight.

According to him, “Cabin Crew must concentrate on customers service .We have seen situations where Cabin Crew don’t know how to de-escalate conflict,”

He also frowned at a situation, where Cabin Crew tries to speak like Britons instead of being themselves by speaking like Nigerians that they are , adding that Nigerian Cabin Crew must develop confidence and by proud of where they are from. Iwarah commended the Chief Executive Officer of MamaJ Aviation Consult Limited and organiser of the Cabin Crew Fair 2018,Joy Ogbebo for a well thought event to enlighten the potential Cabin Crew , adding that the fair would not have come at a better time than now `

The Air Peace Spokesman stated that today airlines in Nigeria are telling the world that they can do it and that the perception they have about Nigerian airlines is wrong.

He said the spirit of ‘we can do it cannot happen without adequate preparation, adding that Nigeria airline had to do what is right at home before

Iwarah added that Air Peace takes the training of Cabin Crew and the profession very serious, adding that the airlines has employed about 300 Cabin Crew .

Earlier, the Chief Executive Officer of MamaJ Aviation Consult Limited and organiser of the Cabin Crew Fair 2018,Joy Ogbebo stated there must be a holistic approach by stakeholders  to raise the bar of Cabin Crew profession.

The approach according to her must be conscious and deliberate.

She contended that Cabin Crew members are no doubt a strategic resource in the cabin, adding that despite the misconception, the invaluable role cannot be over emphasised and that as safety officers, they go out of their ways to make life enjoyable for others. MamaJ, as she is fondly called stated that being the professional that Cabin Crew , it behooves on them to consistently conduct themselves in the most professional manner at all times by going beyond  the duty of call and care  and generally exceeding customer expectation.

According to her, “We all have a role to play; the NCAA, training organisations and airline management. The crucial role of the respective organs and agencies to checkmate the standards cannot be over emphasised. The training organisation must consistently ensure the highest standards of training at the foundation stage. if the training is flawed from the beginning ,that will a recipe for low standard of professionalism”

She added that henceforth the annual Cabin Crew Fair would now hold on May 31 of every year, which is the International Flight Attendant Day.

According to him, “This day is the day set aside to celebrate the important role we all play in aviation safety, educate the general public about the nature of our profession as in –flight safety professionals, and build pride and solidarity amongst our colleagues globally”