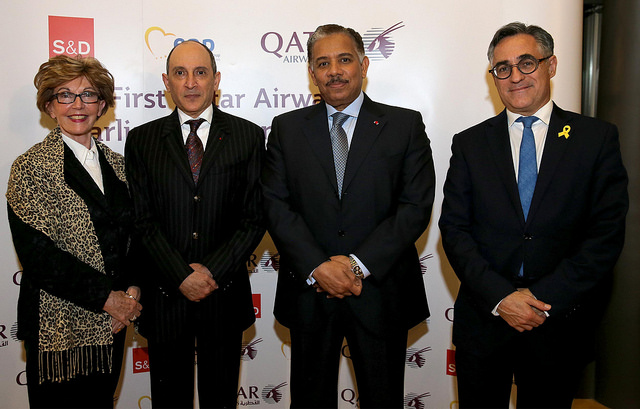 According to the airline the aim of the series of meetings and VIP dinner in the heart of Europe was to strengthen the already robust relationships that the airline enjoys with key MEPs and to demonstrate Qatar Airways’ commitment to the European Union, the world’s largest single market area.

Speaking, Al Baker, said, “The support extended to our country and airline by top European decision makers is truly valued and appreciated. We come here today in the spirit of pursuing enhanced aviation opportunities for our industries and businesses, more options for travellers, and long-term prosperity for our economies, and I have no doubt we will succeed.

“We appreciate the openness and understanding demonstrated by the EU. We also thank the EU for the flexibility and support provided to the State of Qatar under the current blockade.”

During the evening, more than 16 MEPs enjoyed a VIP dinner with key note speeches in the stunning Presidential Salon at the European Parliament, with impressive views over the city of Brussels.

This visit comes at a time when Qatar and the EU are close to completing the final stage of the EU-Qatar Comprehensive Air Transport Agreement, which has offered the State of Qatar and Qatar Airways an excellent platform to engage in candid discussions with its European partners on the potential growth and future cooperation between the two parties.

With 617 weekly flights to Europe, Qatar Airways flies an average of 91,000 passengers a week to more than 50 key cities in the region.

Over the last 18 months, the airline has further enhanced this by launching 15 new routes to Europe, including Nice, Dublin, Malaga, Prague and London Gatwick.

Further route launches are planned in the next year including Lisbon and Valletta, which will take the total number of destinations in Europe up to 56.

Qatar Airways launched its operations to Brussels in January 2011 with a five-times weekly service and this was increased to a daily service in February 2013 and increased again to an eight-times-weekly-service in December 2015.

The operation is currently operated by a Boeing B777 aircraft type.