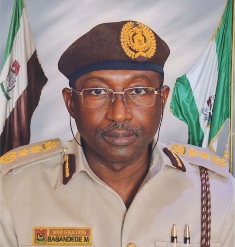 …Clears Backlogs By Working At Night,Saturdays

The Ikoyi Passport Office of the Nigeria Immigration Service (NIS) has recorded production on the average 72,000 passports in six months with an average collection rate of close to 68,000 passports also within that period.

AbelNewsng.com learnt that the 72,000 passports produced is very significant compared to the first half of the year when there were a barrage of complaints  of inadequate passport booklets for huge number of applicants that trooped to the office to get new international passports

It was also gathered by the online news medium, that the successes so far recorded was due to the determination and drive by the Controller General of  Immigration, Mahammad Babandede to ensure that international passports are secured with ease by applicant at the Ikoyi passport office.

Also, the zeal the processes and procedures apart from making of acquisition of passports less tedious, also remove any form of cash transaction that may lead to offering officers of NIS gratification.

A reliable source familiar with the workings NIS Ikoyi office told AbelNewsng.com on the condition of anonymity that said that the challenge of lack of passport booklets was overcome by some of the processes and procedures introduced by the new management team at the Ikoyi office.

“The new management team came in around May and met a lot of files some down to March this year. Then Ikoyi passport office had three months hanging and as we had this three months hanging, we continued to develop more files because the processes of passport issuance had not stopped. As we were having March we were developing another data bank of June and July and if we start clearing March, we are keeping June , July and so that was a challenge we needed to address.”

“We went straight to service headquarters, told them our findings which we met on ground and requested they supplied us with booklets that would be able to cater this backlog. Fortunately, our CG instructed and the booklets were provided and that addressed an aspect of the problem,” he added.

On how the team was able to produce passports and clear the  backlog of applicants as well as those currently seeking application to renew or acquire the passport, the source explained the management introduced the process of  producing  booklets at  night to avoid distractions.

According to him, “We decided for production section to work in the night so that we can meet up, and so we were doing night operations, most specially the area of production. Because during daytime they were hitches here and there that would be dragging the process and make it slow but in the evening and throughout the night there will be no pressure from anywhere.”

He continued, “Our production department work through the night and each night we could produce about 2000 booklets and that was able to cater the backlog.”

To avoid chaos, the source hinted that the Ikoyi Passport Office team had to issue the produced passports seamlessly to several applicants in view of the huge backlogs of applicants

“Since now, we are producing enmasse, so how do you now cater for collection. Imagine, where over the night we produced 2000 passports. All these passports have been expected for two to three months and the passport then were not ready, they will now be anxious and eager to collect and so the collection will now become overcrowded and if there is no management control for the crowd, it means that in itself will boomerang and make the whole process chaotic.”

Continuing, the source said, “So, we needed to strategize, how do we do this? We linked up with the service headquarters to increase the point for the collection. Before then we only had a collection point, we developed an open one here, a VIP, near my the Passport Controllers office so we can bring applicants there to decongest having them in one place and make the place crowded.”

“Subsequently, another was opened at the back, so we took the elder and children to the back, the VIP and the youth can go to the general collection area. So the decentralization reduced the crowd to a manageable number.”

Be the first to comment on "NIS Ikoyi Office Records Production Of 72,000 Passport In Six Months"