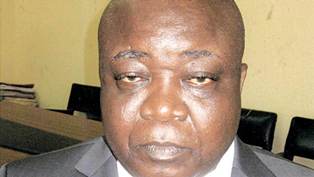 A Federal High Court sitting in Lagos today issued a bench warrant for the arrest of the Managing Director of the Nigerian Railway Corporation, Mr Fidet Okhiria for the alleged disobedience of court order.

Justice Muslim Hassan issued the bench warrant for the arrest of the corporation’s Managing Director consequent upon an application made by plaintiffs’ counsel, Mr Akeem Aponmode asking the court for an order directing the police to arrest  Okhiria and bringing him to court to come and show cause why he should not be committed to prison for the disobedience of court order.

Recalled that Aponmode had earlier filed  an ex-parte application  on behalf of the plaintiffs led by Alhaji Moruf .K. Salami, Mrs Uyo Nwajei and Alhaja Aisha Aminu Gwadabe and others against the NRC and four others over attempts to forcefully and illegally acquire their properties without recourse to due process.

Justice Hassan had on August 3, 2018 granted an order directing parties to the dispute to maintain status quo ante bellium pending the determination of the motion on notice.

The plaintiffs led by Alhaji Moruf . K. Salami, Mrs Uyo Nwajei and Alhaja Aisha Aminu Gwadabe  had  in an ex-parte application filed  before the court against the Nigerian Railway Corporation, NRC, the Federal Ministry of Works, Power and Housing, China Construction and Electrical Investment Company Limited, the Inspector General of Police and  the Attorney General of the Federation , seek for an order restraining the defendants from demolishing, damaging, or tampering with properties lying and situate at Block 1 House 1 , Block B House 1 and Block E House 2, Adisa Housing Estate 308B, Murtala Mohammed Way , Yaba, Lagos pending the determination of the motion on notice filed before the court.

The plaintiffs are also asking the court to restrain the defendants from disturbing the peaceful possession of the respective plaintiffs or anyone living with them or their respective properties pending the determination of the motion on notice filed in the suit.

However, on the last adjourned day, plaintiffs’ counsel told Justice Hassan that despite the pendency of the suit and the order of the court directing status quo to be maintained pending the determination of the suit, and service of same on the defendants, the defendants continued to take actions inimical to the interest of the plaintiffs .

Aponmode added that when the plaintiffs noticed that the defendants have brought in equipments to demolish their properties, the plaintiffs rushed to the court with Form 48 ( notice of disobedience to court order) and same was served on respondents.

‘Despite the service of Form 48 on respondents they still went ahead and demolish the properties thereby turning the plaintiffs to homeless people.’ Aponmode said.

The plaintiffs counsel added that this flagrant disobedience to court order necessitated the filing of Form 49, committal proceedings against the defendants.

Meanwhile, at the resumption of hearing today, Aponmode told Justice Hassan that the matter was adjourned on Friday till today to move his application for the committal of the contemptnor.

He, however, said that for the contemptnor not to claim ignorance of today’s proceedings, he took it upon himself to write them, notifying them of the proceedings and proof of service filed in court to fulfill all righteousness.

He said the Managing Director of the first defendant is aware of the proceedings and that all conditions for the activation of committal proceedings have been met.

” The Managing Director of NRC chose to deliberately disobey the order of the court.”

Aponmode said that the country is governed by the constitution, adding that impunity cannot be allowed to be the order of the day in the country.

The legal practitioner however, said that since the matter is quasi criminal in nature and that somebody’ head can’t be shaved in his absence, he urged the court to grant an order that the police should arrest the Managing Director of the first defendant and bring him to court so that he can come and show cause why he should not be committed to prison for disobeying the order of the court.

Justice Hassan in his ruling said ” I have listened to the plaintiffs’ counsel and from the court’s records the defendants were served with the motion on notice, order of the court directing status quo, Form 48 and 49, yet the  first defendant is not in court with no reason given.

” I have no reason than to accede to plaintiffs’ counsel request. I hereby issue a bench warrant for the arrest of the first defendant’s managing director.”.

Justice Hassan added that the Nigerian Police should arrest and produce the first defendant’s managing director in court on the next adjourned date to come and show cause why he should not be committed to prison for disobeying the order of the court .The court consequently adjourned the matter till 10th of December, 2018

The plaintiffs who are residents of Adisa Housing Estate Multala Mohammed Way , Ebute Meta , Lagos had earlier approached the court over attempts by the Nigerian Railway Corporation to acquire their properties without recourse to due process.

The residents said that in as much as they are not opposed to government acquisition of their properties for overriding public interest, they however averred that such action should follow due process which should also guarantee their right to own properties and life.