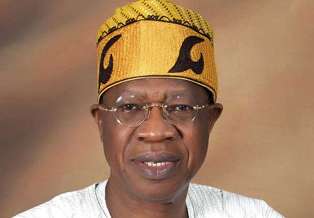 A Federal High Court, Lagos presided over by Justice Rilwan Aikawa, today dismisses a contempt application filed by a former Minister of State for Finance, Mrs. Esther Nenadi Usman, seeking to commit the Minister of Information, Alhaji Lai Mohammed to prison for the inclusion of her name in the ‘looters’ list’ he released to the public.

Justice Aikawa described the application as a distraction which could interfere with the speedy determination of the matter.

Mrs. Usman, who is facing allegations of money laundering brought against her and a former Minister of Aviation, Femi Fani-Kayode, had argued in the contempt application that the inclusion of her name on the list released by the Information Minister during the pendency of the case against her is contemptuous.

She therefore urged the court to commit the Information Minister to prison for contempt of court for his alleged contemptuous action.

The former Minister had also argued that Mohammed’s action undermines the integrity of the court and is aimed at poisoning the mind of the public against her.

But the EFCC lawyer, Rotimi Oyedepo, urged the court to decline the Usman’s application, insisted that the applicant was never referred to as a looter by the Information Minister saying what was published by some newspapers only bordered on allegations and cannot be said to be prejudicial to the applicant’s case in court.

“There was nothing that connects the Ministry of Information to the motion which was taken out to annoy the prosecution. The motion is lacking in substance, it is an abuse of court’s process and should be dismissed,” Oyedepo maintained.

In his ruling, Justice Aikawa agreed with the prosecution that the right parties to the contempt proceedings were not before the court.

According to him, the publications which the applicant complained of was published by media houses and not the alleged contemnor, so the right parties to be joined in this application are the media houses.

The judge also held that a mere publication which did not go to the substance of the case or directly affect the proceedings before the court can not be said to have interfered or influenced the mind of the court.

He further stated that the publication is not an advertorial from the Minister of Information, so he can not be held responsible for what was published by the media houses.

The judge therefore hold that the publication is not prejudicial to the applicant’s case in court and it is thereby dismissed for lacking in merit.

The Economic and Financial Crimes Commission (EFCC) had re-arraigned Usman, Fani-Kayode, Yusuf Danjuma, a former Chairman of the Association of Local Governments of Nigeria (ALGON) and a company, Joint Trust Dimensions Limited before Justice Aikawa on a 17 count charge of conspiracy, unlawful retention of proceeds of theft and money laundering.

According to the EFCC the accused persons on or before January 2015, unlawfully retained the total sum of N4.6 billion, which they knew was a proceeds from an unlawful act.

While Usman, a former Minister of Finance, under the President Goodluck Jonathan Administration, Danjuma Yusuf and Jointrust Dimentions Nigeria Limited retained the sum of N1.5 billion, Fani-kayode and Olubode Oke, said to be at large, were accused of retained the total sum of N1,650,650 billion.

The accused persons were also alleged to have made payment of several amounts running to billions of Naira without going through Financial institutions.

The offence which was allegedly committed between January 2015 and March 2015 is said to be contrary to Section 18(a) of the Money Laundering (Prohibition) (Amendment) Act, 2012 and punishable under Section 15(3) & 4 of the same Act.

They all pleaded not guilty to the charge.