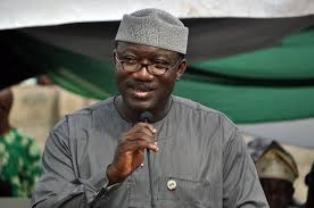 …Says I cannot Destroy Ekiti Heritage Because Of Politics

“I want to express my anger with what I have seen here today. I am really upset. You all witnessed the spate of development here in 2014; you knew the patronage this facility was enjoying. What I met here today means to me a destruction of Ekiti’s heritage, destruction of our common wealth.”

These were some of the words of the Ekiti State Governor, Dr Kayode Fayemi, while speaking during the inspection of the facilities at the once thriving Ikogosi Warm Spring on Monday.

Fayemi, who could not hide his anger at the state of the Resort orchestrated by his predecessor, Mr Ayodele Fayose, lamented that the abandonment of Ikogosi Resort Centre, which he described as a major tourist attraction in the country, as a flagrant and brazen ‘destruction of Ekiti’s heritage’.

Fayemi argued that it was wrong for the Fayose led administration to abandon the warm spring site and manage Gossy Warm Water produced from the spring off the market under the pretext that the project was midwife by the preceding government.

The governor, who is planning to transform Ekiti’s tourism potential to increase Internally Generated Revenue (IGR) of the state, also visited the Arinta Waterfall site in Ipole Iloro.

According to him, “I want to express my anger with what I have seen here today. I am really upset. You all witnessed the spate of development here in 2014, you knew the patronage this facility was enjoying. “What I met here today means to me a destruction of Ekiti’s heritage, destruction of our commonwealth. It was unfortunate that our government had become so careless to allow this major tourist attraction and revenue earners for Ekiti to destroy and decay. This could have been avoided if the last government had maintained the facilities therein, because it involved Ekiti’s money. It is not only the leadership that was culpable; the management of this place too should be held accountable, though I agree that leadership defines everything. Now, everything is in shambles.

He continued, “But my believe has been that a major tourist attraction like this shouldn’t be left in the hands of government alone to manage”.

He assured the United Africa Company(UAC)  owner of Gossy water project , who had since left the market due unfavourable business environment created the immediate past administration that he would ensure that it comes alive again.

“Gossy water is associated with Ekiti,it  is a brand that was known to belong and part of Ekiti. Wherever you see the water, you will think of Ikogosi Warm Spring, so we are going to bring it back to live. Apart from the fact that the facilities in this resort had damaged, the roads to this place are impassable, particularly the Aramoko- Erinjiyan-Ikogosi road . Half of the 110 rooms in this resort are not habitable, this is unacceptable to us.”

Speaking further, the visibly angry governor said, “This is not what Ekiti was known for, this is not what we are, because we used to manage the little we have . That the immediate past government doesn’t responsible for the turnaround of this resort does not mean it should be abandoned. I believe the immediate past government should have improved on the development we brought here before we left in 2014 and not to allow it to damage.” Continuing, he said, “I cannot because of politics cancel the Gifted Academy in Afao Ekiti, I can’t demolish the flyover and the new governor’s office built by the past administration, I can only improve on them and that is what governance is all about. “