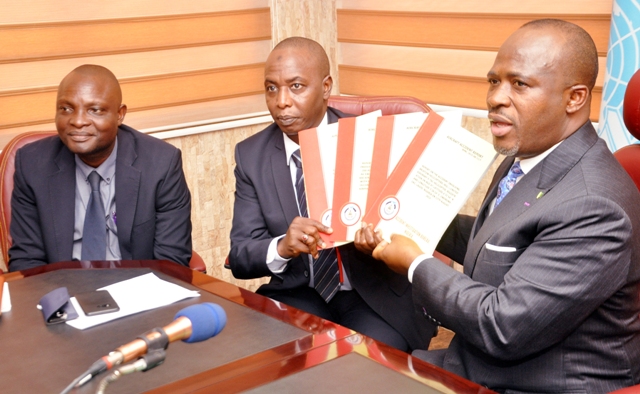 This is just as it released three other reports which includes one accident and two serious incident reports, which occurred in July and August 2015.

The reports were released this afternoon at a media briefing by the Commissioner of AIB, Engr. Akin Olateru, at the Bureau’s headquarters, Murtala Muhammed International Airport(MMIA),Lagos.

Olateru said that the current administration has achieved 52.1 per cent on publication of accident and serious incident reports and 47.4 per cent of safety recommendations since coming onboard in January, 2017.

He said that some of the accidents and serious incidents would have been averted if parties involved had adhered strictly to safety policies in the industry.

The reports released by AIB included the accident involving Bristow Helicopters (Nigeria) Limited Sikorsky S-76C+ helicopters with the registration number 5N-BGD, which happened on August 12, 2015 at the Oworonshoki area of Lagos. On the accident involving Pan African Airlines Bell 412 EP Helicopter with the registration 5N-BDZ, which occurred near SEDCO Energy Rig Platform on July 26, 2004, Olateru stated that the erstwhile Accident Investigation and Prevention Bureau (AIPB) received its notification on July 28, 2004, which was 48 hours after the accident.

AIB noted in its report the causal factor of the accident could not conclusively be determined but that however, the rostered Pilot in Command (PIC) was not the Pilot Flying (PF) and that the PF was rostered as the Pilot Monitoring (PM)

The report added that the crashed helicopter had a valid Certificate of Airworthiness (COA) at the time of the crash.

On the Bristow Helicopters Sikorsky S-76C

with the registration number 5N-BGD which crashed into the Lagoon at the Oworonshoki area with 12 persons onboard, including two crew members shortly before landing at Murtala Muhammed Airport, Ikeja, AIB said that there were six fatalities including the two pilots, while other six persons onboard sustained serious injuries.

AIB further explained in the report that the helicopter had departed SEDCO Express oil rig at about 14:55hrs with an endurance of one hour and thirty minutes maintaining 3,000ft with the estimated arrival at Lagos Airport at 15:36hrs, according to the crew information before departure from the rig. Olateru further explained that the helicopter experienced sudden un-commanded pitch up, yaw, and roll for about 12 seconds until it impacted water at about 15:31hrs, stressing that the pilots were neither able to make any form of distress call to Air Traffic Controllers (ATC), SEDCO Express rig or communicate with the passengers before impact.

According to the report, “Rescue operation was swift, prompt and carried out by local fishermen who were in the area. There were six fatalities, including two crew members and six seriously injured passengers. The crewmembers were recovered the following day. The helicopter was destroyed, but there was no post-impact fire.”

AIB recommended to Sikorsky Aircraft Corporation to redesign the affected control pushrod assembly by introducing wire lock or lock pins as safety features between the jam nut and the pushrod to enhance better security and safety.

The accident had occurred at Lagos Airport on July 6, 2015.

According to the report, the Emirates aircraft with 285 passengers had requested to take off through the 18R runway, which the ATC replied that was unavailable at the time, but the pilot opted to use the 18Left runway for take-off.

“The crew asked for when the runway would be available. The tower reported that the time was not determined, but 18L was available. After determining the aircraft take-off performance, the crew accepted to use runway 18L. The Tower advised UAE782 that taxiing via taxiway C for runway 18L would be at pilot’s discretion due to aircraft wing span,” the report said.

It continued, “However, the crew commenced the taxi and impacted a HAK Air Boeing 737-400 aircraft parked at the parking bay of the General Aviation Terminal (GAT), close to holding point runway 18L, at about 21:38hrs, damaging the rudder and the tail area of the HAK Air aircraft, while the Emirates aircraft sustained damage to its right wing tip.”

AIB made safety recommendations to the Federal Airports Authority of Nigeria (FAAN) and NCAA on the incident.

On the report a serious incident involving Aero Contractors aircraft B737-42C with the registration 5N-BOB, which occurred on the same 18L runway of Lagos Airport on July 21, 2015, AIB made two safety recommendations to FAAN and the Nigerian Airspace Management Agency (NAMA) on the serious incident.

The report asked FAAN to endeavour to improve coordination with NAMA for the proper monitoring of runway inspections and other runway activities.

While NAMA was advised to coordinate with FAAN during the investigation of all reports of runway conditions/incursion and should also inform NCAA of all such occurrence.

Be the first to comment on "14 Years After: AIB Releases Pan Africa Airlines Accident Report"