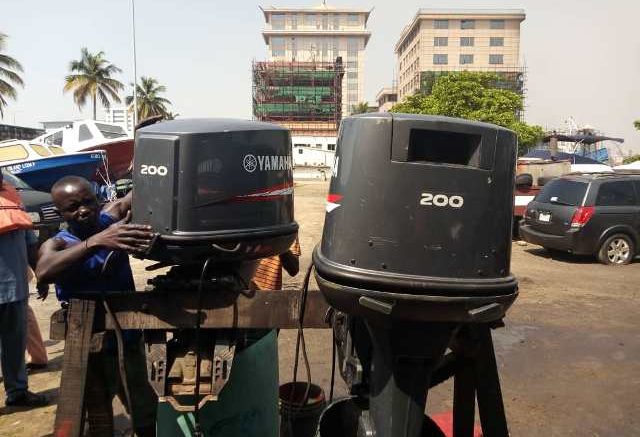 The engines were received by the Officer In –Charge,Chief Superintendent of Police (CSP) Benjamin Ogungbure and his entourage on behalf of the State Marine Police. Speaking shortly after handing over the engines, Balogun stated the refurbishment and eventual delivery of the engines to the State Marine Police was in fulfillment of the pledge earlier by ATBOWATON) to assist the Command in refurbishing its engines that were damaged at the ODE OMI boarder creeks between Ondo and Ogun State which resulted in killing the leaders of the pirates in one of Marine Police’s operations.

He added that the association promised to render all necessary assistance to the Police to boost its crime fighting and surveillance on water ways. * Members of ATBOWATON and officers from the State Marine Police in life jackets at Tarzan Jetty, Lekky ,Lagos today.

According to Balogun, “As at December 2017, two of the engines had been fully repaired while we place order for the major spare parts required for the 3rd engine. One was thus returned to them to assist during festival period surveillance patrol. I am happy therefore to present the remaining two engines to them, having perfectly carried out the mechanical repairs and refurbishment of the engines.”

He continued, “We please implore the Nigeria Marine Police Force to kindly accept our token contribution to support their relentless services to our dear nation most especially our riverine communities, boat operators, boat users and the general public. We appreciate your effort in combating crime and your effort in the recovery of our members’ engines stolen from us by armed sea pirates in recent time. May Almighty God continue to guide and protect you in discharging your services to our dear nation.”

Receiving the engines, Ogungbure commended ATBOWATON for its kind gesture and also for keeping to its promise to assist the Police in refurbishing the engines,  assuring the association that the engines would be judiciously used. * A group photograph by ATBOWATON members,officers from the state Marine Police, NIWA and LASWA shortly after the association handed over the two 200 Horse Power boat engines today

The Officer In Charge, Ogungbure appealed to other companies to emulate ATBOWATON, as their assistance would go a long way to help the State Marine Police in securing and fighting crimes on water ways.

He assured the association that since the ember months are already here, the police will ensure that what ways are safe for water transport and other water related activities.

Also speaking, a representative of the National Inland Waterways Authority(NIWA),Engr. Stanley Onuoha, stated that ATBOWATON,had done very well, adding that what it has done today is not the first time ,as the association has been all the nook and crannies of the riverine communities.

Onuoha, who is also representing the Lagos  Area General Manager, NIWA, Engr. Muazu Sambo, stated that NIWA would continue to work with the association for safer waterways. He also assured the police that NIWA would also work with them as the first responder in the event of any crisis in the waterways.

According to him, “We appreciate everybody for their contributions towards making marine transport a success.”

Also present at the presentation ceremony was the Secretary of Lagos State Waterways Authority(LASWA, Mr. Falase Peku commended the association for its assistance to the Police and also for not leaving the  idea of assisting the Marine Police to the government.

He added that Marine Police is very necessary for the achievement of safe  water transport in the state.