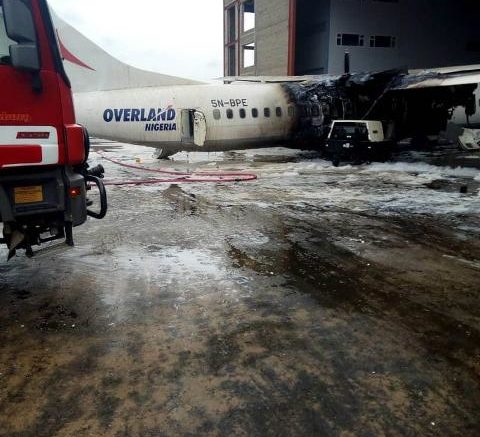 * The burnt aircraft after the fire was put out.

The Federal Airports of Nigeria(FAAN) has stated that officers of the Aerodrome Rescue and Fire Fighting Services (ARFFS) contained the fire that engulfed Overland Airways ATR airplane with registration number 5N-BPE yesterday at the airline’s hangar at the General Aviation Terminal (GAT) of the Murtala Muhammed Airport (MMA),Lagos.

An online issued by the General Manager, Corporate Affairs, Mrs. Henrietta Yakubu informed that in what could have resulted into a major fire disaster, officers of the ARFFS put out a fire that almost consumed an aircraft belonging to Overland Air.

She added that the incident, which occurred on October 12, 2018, at the airline’s maintenance hangar, was prevented from spreading to other parked aircraft and facilities.

Be the first to comment on "Overland Airways Aircraft Inferno: Our Men Contained The Fire From Spreading –FAAN"