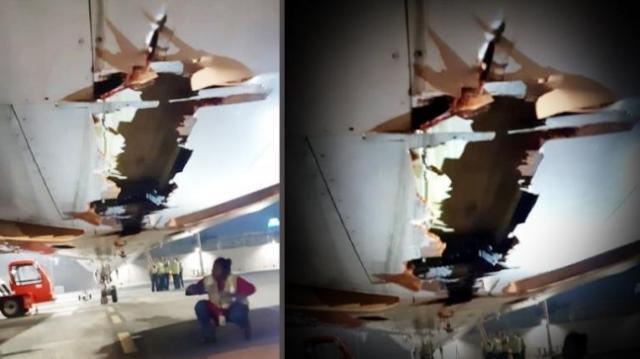 For four hours, an Air India Express international flight that had 136 people onboard flew with a ripped underbelly. The pilots of that Boeing 737 passenger jet seemed to be unaware of the damage that their plane had suffered.

The flight in question was Air India IX 611, an early morning service between Tiruchirappalli (Trichy) in Tamil Nadu, and Dubai. Air India Flight IX 611 took off from the Trichy airport at around 1.30 am this morning.

Seconds after the plane took off — and before it cleared the airport perimeter — it struck a wall at the end of the runway.

Officials in the Air Traffic Control (ATC) tower noticed this and immediately raised an alarm. ATC controllers got in touch with the two pilots of Air India Flight IX 611 and told them that their aircraft may have come in contact with the perimeter wall at the Trichy airport.

The pilots — who had a combined flying experience of 6,600 hours on a Boeing 737 (that’s around nine months of non-stop flying on the jet) — however reported that their aircraft systems were operating normally.

So, the pilots decided to continue flying and decided to divert to the Mumbai airport as a precautionary measure.

Air India Flight IX 611, which had 130 passengers and six crew members onboard, continued flying for the next few hours, heading to the Chhatrapati Shivaji Maharaj International Airport in Mumbai.

The flight landed there at around 5.30 am and taxied to its parking spot even as emergency personnel stood by.

It was only after the Boeing 737 came to a halt in its parking bay that the extent of damage suffered by the aircraft was known.

The fortunate passengers of Air India Flight IX 611 were moved to a different aircraft, which then took for Dubai with a fresh crew.