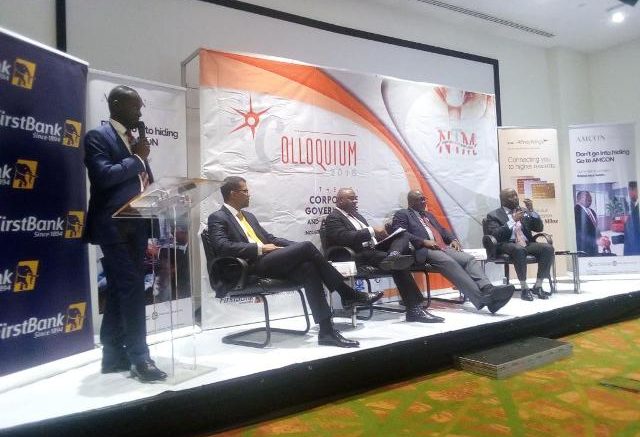 …Lacks Effective Board Of Directors

…As Tumba Advises FG To Take Concession Of Airports Seriously

The Chief Executive Officer of Asset Management Corporation Nigeria (AMCON), Mr. Ahmed Kuru has said that he is in support of the Federal Government concessioning airports in the country but that the process must be transparent.

He said concession of airports is the only way the country can provide state –of –the art infrastructure at airports and also make them compete with other airports in world.

This is just as he stated that the main reason why Nigeria airlines have short life span compared to their counterparts abroad is due to lack of effective Board of Directors and effective regulations.

He stated these while presenting a paper titled,”Corporate Governance and Airline Industry Development In Nigeria” at the Nigeria Travels Mart (NTM) Colloquium in Lagos today.

Kuru ,who delivered his paper with humour pointed out that Nigerian airports can only get the necessary infrastructure if they are concession , adding that the only thing that Nigerians must demand transparency in the process.

According to him, “Good airport is an enabler for investment. They must concession all the airport but there must be due process.”

He pointed out that Lagos, Nigeria is geographically positioned to be the hub of the world not only for Africa becuase it is at the centre of the world.”

On Corporate Governance, said that airline business is complex, capital intensive, low naira return on capital with very low tolerance for failure and incompetence and that it requires a high level of competence and discipline.

He contended that many reasons may account for the failure of airlines but that unfortunately they are not peculiar to aviation, businesses that hardly last 50 years in Nigeria.

Kuru added that airline operators would readily point to lack of adequate government support, the burden of taxes, poor infrastructure, among other and these could be fair points.

“However, from our first-hand experience, we see that the cardinal point behind the failure of a good number of these airlines is because they were established without deep-rooted Corporate Governance principles that can make the companies last and prosper.”

According to him, “The purpose of good Corporate Governance is to facilitate effective, entrepreneurial and prudent management that can deliver the long-term success of the company and in certain instances, public interest. Robust corporate governance ensures that the business is well-managed, properly controlled, has a formal and balanced decision-making framework with independent input. The anchor of good Corporate Governance is the Board of Directors.”

Earlier, the organiser of the Nigeria Travels Mart, Mr Simon Tumba stated that generally corporate governance in most private enterprise in Nigeria is weak, but that the airline industry in Nigeria is worse.

He stated that he decided to pick the topic having personally watched developments in this sector for 29 years.

He added that it is a major contributory factor to the dwindling fortunes of the industry or its stunted growth, or lack of it.

Speaking further, he said, “We have observed how some strong airlines have almost vanished due to lack of financial discipline. How do you describe a director of an airline, who will take $10,000 for a weekend spree? Or give a Japanese publication a $20,000 advert because the advert executive flash her laps before the director? Or how some aircraft were purchased at unbelievably exorbitant rates. I can go on and on.”

He continued, “We at NTM strongly believe that we have the potential to have a very vibrant airline industry. All we need amongst others is to be consistent in our policies, be more innovative and creative, with strong regards to corporate governance. “

On the suspended Nigeria Air project, Tumba advised Federal Government to take a second look at the issue of concessioning of Nigeria airports , as this would give the country an edge.

“Nigeria Air project. There are various schools of thought on this project, but I believe the government should give more priority to the issue of airport concession. This will give Nigeria an edge and hopefully catapult us to the needed growth in this sector. It is very important that this is executed in a transparent manner with full support of the workers,” Tumba said.

Be the first to comment on "AMCON Backs Concession Of Airports"