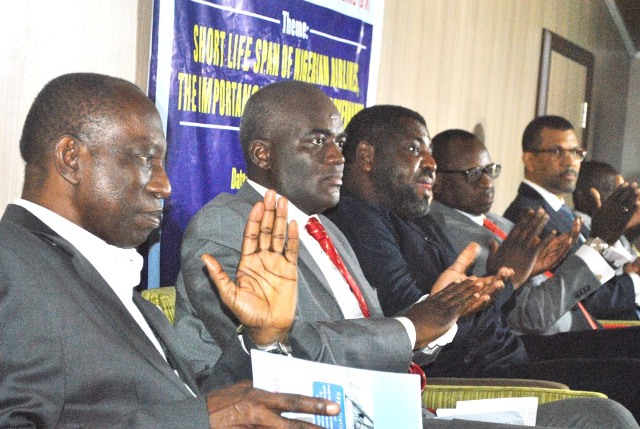 …Says Airline Operator Must Have

Former Director General of Institute of Directors, Mr. Victor Aderenle Banjo stated that as part of efforts to ensure that domestic airlines in the country are not only viable but also have long life span, the reform used in sanitising the banking industry should be introduced in the aviation sector especially for the airlines.

He said this while speaking at the Aviation Safety Round Table Initiative Quarter 4 2018 Quarterly Business Breakfast Meeting with the theme, ”Short Life Span of Nigerian Airlines ,The Importance of Corporate Governance” at Golfview Hotel and Suite, Lagos .

Banjo stated that if this was done, it would make the airlines more economically viable and increase their life span compared to what is currently obtained.

The Nigerian Civil Aviation Authority (NCAA) , he argued has a lot to do in this area but that unfortunately, “NCAA say the right thing but do not do the right thing.”

Banjo opined that there are several reasons why domestic airlines in the country have short life span, adding that one of the main reasons is that they lack good corporate governance.

Banjo, a former Director Human  Resources  with defunct  Virgin Nigeria, stated that  the  composition of the board matters , adding that a situation where the Board of Directors of an airline is made up of father, mother, children , sisters and brothers of the owner  does not augur well for the airline.

According to him, “Who make up the airline’s Board of Directors; the father, wife, children, sisters and brothers of the owner.”

He said that for domestic airlines in the country to have long lifespan and thrive, they must have the four pillars of good Corporate Governance, which includes: accountability, fairness, transparency and independence. To buttress his point, he cited the case of the moribund Virgin Nigeria, which according to him suffered over bearing influence from the Federal Government.

He also said that a situation where the Managing Director of an airline and is also a pilot and still flies, ”who does he reports to.”

On his part, the Managing Director of Overland Airways, Capt. Edward Boyo stated that it would be wrong to use the defunct Virgin Nigeria as a good model of an airline with good Corporate Governance, adding that the airline also made some mistake which the managers of the airline did not see.

Good Corporate Governance, he said is a given, adding that a situation where Nigerians built international terminal and hand it over to foreigners to operate would not be tolerated.

Nigerian airlines, Boyo further contended are not only talked down on but that they are not also given the enabling environment to operate and survive, calling on Nigerians to always support and patronise  Nigerian airlines.

He added that good Corporate Governance alone cannot make airlines to have long life span, adding that it goes beyond that and that competence is very crucial in the management of airline.

In his words,”The key is competence and other factors. Everything must work together. NCAA is adopting style that is not compatible with Nigeria environment.”

On the pilot ownership, Boyo said that it should not be abused by commentators, as Overland Airways is acting in line within the provision of the law and that today the airline is not indebted to Asset Management Corporation of Nigeria(AMCON).

In his words, ”Overland Airways is the longest serving airline in Nigeria today and we are not owing AMCON.”

He continued, “I am going to hand over leadership of the company at some point but not today .It should not be dictated from outside because we are working in line with the law.

Speaking further, he said,  “You cannot manage an airline without being politically savvy. Virgin Nigeria failed because they super imposed foreign political knowledge on that of Nigeria.

According to him, Airline operation is not for the weak hearted. You must be strong, bold and politically savvy.”