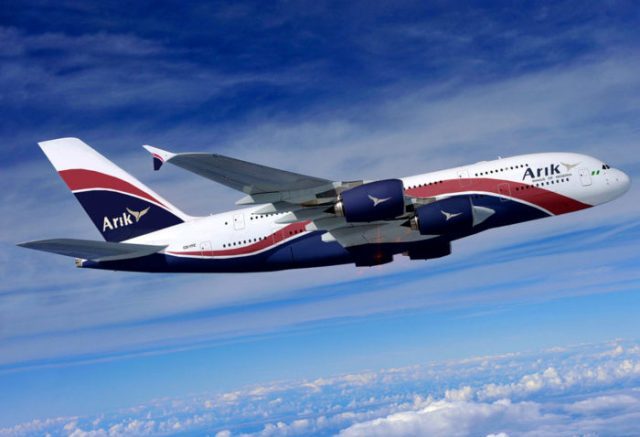 Arik Air, has stated that it would give away 250 free tickets on October 1, 2018 to celebrate Nigeria’s 58th Independence anniversary.

The airline said that customers flying Arik Air on Monday, October 1 have the opportunity of winning complimentary tickets on board as five one-way economy class tickets will be raffled on each and every flight of the day.

Arik Air said that in the course of the day’s flights, the crew will conduct a raffle using the seat numbers to draw five winners on each flight for the free one-way economy class domestic tickets.

Speaking on the Independence offer, Arik Air’s Chief Executive Officer (CEO), Capt. Roy Ilegbodu said, “Arik Air is a wholly Nigerian airline and the independence anniversary of the country is an auspicious occasion to appreciate our customers for their loyalty.

“We wish all Nigerians a Happy Independence Anniversary,” he said

Arik Air is one of the oldest commercial airlines operating in Nigeria. The airline will be celebrating its 12th anniversary on October 30, 2018.

Be the first to comment on "Nigeria’s 58Th Independence Celebration: Arik Air Gives Away 250 Free Tickets"