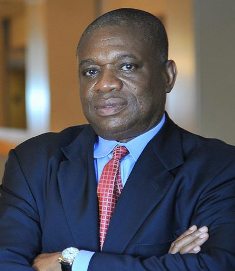 Justice Mohammed Idris adjourned the case after hearing the application by the defence counsel challenging the court’s jurisdiction to continue hearing the criminal charge.

The Economic and Financial Crimes Commission (EFCC) is currently prosecuting Orji Kalu together with his former Commissioner for Finance, Ude Udeogo, and a company belonging to the former Abia State governor, Slok Nigeria Limited.

The defendants had pleaded not guilty to the charges and were granted bails.

Ozekhome then informed the court of application challenging the jurisdiction of the court to continue with the trial of the accused.

After several arguments by both defence and prosecuting counsel on whether the motion should be heard, the court finally granted permission for defence to move his motion.

Moving his application, Ozekhome told the court that his motion was brought pursuant to the 1999 Constitution as amended.

He argued that his four-ground application challenges the constitutionality of Justice Mohammed Idris to continue to try the accused, having being elevated to the Court of Appeal.

“This Judex, having being elevated as a Court of Appeal judge, cannot continue to sit as a Federal High Court Judge to try this charge; it is illegal unlawful and unconstitutional,” he said

Referring the court to the provisions of sections 238, 239, 240 , 252 and 253 of the Constitution, Ozekhome argued that the provisions makes it clear, that the Court of Appeal which is “peopled” by justices such my lord, cannot sit as a court of first instance, but only on Appeal.

Besides, he submitted that where the court is indisposed to granting the application to excuse itself, then, the court should be gracious enough to afford the accused a time frame for medical travel overseas.

He noted that on a scale of 57 times, the accused has been present not less than 56 times to stand his trial; he therefore, urged the court to grant his application.

On his part, the prosecutor, Mr Rotimi Jacobs, SAN, opposed the application challenging the court’s jurisdiction on the grounds that it was a ploy to stall the case which he argued had lingered for so long.

He urged the court to refuse the application and call upon the accused to begin his defence, adding that a fiat had already been issued for the judge to continue with the trial which is already at its concluding stage.

Moreso, prosecution argued that the said fiat was sought for and obtained by the defence, adding that it would be unfair for defence to do a turnaround at this point. He urged the court to proceed with trial.

Delivering a bench ruling on the application, Justice Idris held that he would resist the temptation of delving into issues which were already on Appeal.

He noted that although the issues raised by defence counsel were recondite, he would however, apply caution in his ruling.

“I have listened to the learned senior counsel and again the issues raised are live issues already before the learned law lords of the Court of Appeal.

“Trial shall proceed,” he said

After the court’s ruling, defence counsel then sought for an adjournment till tomorrow, to enable the defence begin his trial.

“My lord, I crave the indulgence of the court for an adjournment till tomorrow, to enable the lead defence counsel to attend and handle the trial.

“We have absolutely nothing to be afraid of, but as a senior counsel I must make certain observations where necessary,” he said

Justice Idris consequently adjourned the case until Sept 27 for the defence to open its case.

Kalu is being tried alongside his company, Slok Nigeria Limited, and Ude Udeogu, who served as Director of Finance and Account at the Abia State Government House during Kalu’s reign as governor.

In one of the counts, the EFCC alleged that Kalu, who was Abia State Governor between 1999 and 2007, “did procure Slok Nigeria Limited, a company solely owned by you and members of your family – to retain in its account, domiciled with the then Inland Bank Plc, Apapa branch, Lagos, an aggregate sum of N7,197,871,208.7 on your behalf.”

The prosecution claimed that the N7.1bn “formed part of the funds illegally derived from the treasury of the Abia State Government and which was converted into several bank drafts before they were paid into the said company’s account.”

The prosecuting counsel, Jacobs, said the ex-governor violated Section 17(c) of the Money Laundering (Prohibition) Act, 2004, and was liable to be punished under Section 16 of the same Act.

Apart from the N7.1bn, which he was accused of laundering, the ex-governor and the other defendants were also accused of receiving a total of N460m allegedly stolen from the Abia State Government treasury between July and December 2002.

The prosecutor said they breached Section 427 of the Criminal Code Act, Cap 77, Laws of the Federation of Nigeria, 1990.

On their part, Udeogu, Slok Nigeria Limited and one Emeka Abone, said to be at large, and another fellow, Michael Udo, also at large, were accused of collaborating with Kalu to conceal the “genuine origin” of allegedly stolen funds.

The EFCC said they are liable to be punished under Section 14(1)(b) of the Money Laundering (Prohibition) Act, 2004.

The defendants, who have been standing trial for 11 years, however, pleaded not guilty to the charge

Be the first to comment on "N4.6B Fraud: Orji Kalu Opens Defence Tomorrow"