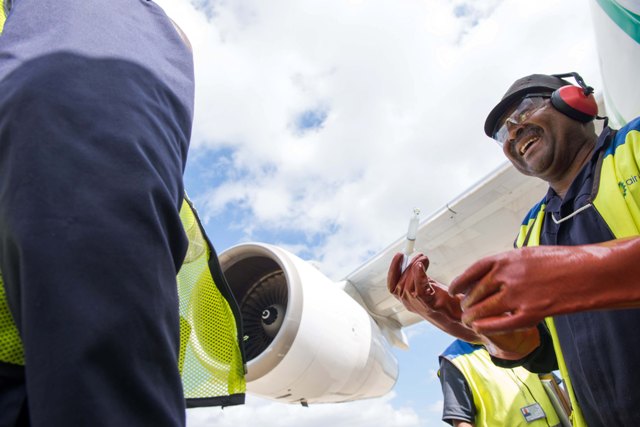 Air BP, the international aviation fuel products and services supplier, returns to Africa Aerospace and Defence (AAD) 2018 at Waterkloof Air Force Base in Pretoria, South Africa, this week as a Gold Sponsor.

The company will use the event to share how its technical services offer and low carbon solutions can support aviation growth in Africa.

At the AAD event in South Africa Air BP will be at Hangar 5, Stand 14..

Predicted to be one of the fastest-growing aviation regions over the next 20 years, Africa is a key market for Air BP .

Air BP first started operations on the continent 75 years ago in Mozambique and Zanzibar and now provides fuel at about 40 locations across the continent.

Air BP’s technical services offer is a complete aviation fuel consultancy service tailored to customers’ individual requirements and it includes a range of innovative technical services for airports including the design, build and operation of fuelling facilities to help customers protect their operations and manage risk. In June 2018, Air BP celebrated one year since it took over the management and fuel operations at Cape Town International Airport.

The airport has experienced double digit growth in international passenger numbers over this period, which Air BP has successfully managed without any safety incidents.

Cape Town International complements Air BP’s operations at OR Tambo International Airport in Johannesburg, where it has managed a similar but larger scale operation since 2011.

Air BP’s General Manager, Southern Africa Anthony Leon, who will be attending AAD this week said, “It is estimated that aviation in Africa will grow on average by five per cent per year over the next 20 years and that passenger traffic will grow by about 3.8 per cent annually up to 2032. Our technical services offer, with its proven track record of improving operations and reducing risk, is an ideal solution for those planning to develop their fuel facilities as the industry grows.”

Air BP’s innovative Airfield Automation technology, which is designed to enhance safety, reliability and compliance in airport fuelling operations, will start being rolled out to locations in Africa this year.

This distinctive digital platform for operators and airports is the first commercially deployed system in the world to provide an engineering barrier to actively help prevent misfuelling.

Air BP will also be sharing its low carbon solutions with customers at AAD, as the first aviation fuel supplier to achieve carbon neutrality for its into-plane fuelling services across an international network of over 250 operated facilities in 2016.

Air BP has made a 10-year commitment to retaining the accreditation through adhering to a carbon reduction plan.

The plan targets a five per cent reduction in carbon emissions using a number of initiatives including driving efficiency in technologies such as start/stop technology on vehicles, improving operational efficiency and stock management and introducing projects and initiatives.

Through the plan, Air BP has improved its supply operations planning and stock management at Cape Town International, with the introduction of additional offloading points in the depot. In addition, at OR Tambo International airport Air BP has recently worked with a technology partner to develop and install a bespoke engine start/stop system, which shuts the fuel dispenser engine down whilst re-fuelling the aircraft thereby reducing the carbon emissions by over 20 percent. Air BP is planning to deploy this technology globally.

In May 2018 Air BP’s presence in Africa grew to almost 40 locations with the addition of six locations in Ivory Coast, Morocco, Cape Verde and Mauritius through a commercial services agreement with Vivo Energy.

Air BP currently supplies commercial, general and military aviation customers at nine locations in South Africa, 10 in Egypt, seven in Tunisia, seven in Mozambique, two in Morocco, two in Cape Verde and one each in Mauritius and Ivory Coast.

The company’s operations in Africa are supported by about 180 employees.