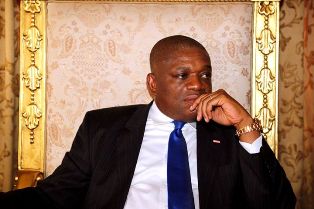 Justice Mohammed Idris of the Federal High Court Lagos, today, came hard on the former Abia State, Governor Orji Uzor Kalu, for absenting himself from Court for the continuation of his trial for alleged N7.65bn fraud.

The judge in a ruling described as “highly irresponsible” the conduct of the former governor in the case since July 31, 2018 when his no-case submission was dismissed and he was directed to open his defence.

Justice Idris recalled that on July 31 after he dismissed Kalu’s case and directed him to open his defence, the former governor begged for a six-week adjournment on the claim that he had a surgery appointment in Germany.

However, Justice Idris said on Monday, that he doubted Kalu’s claim of the said surgical appointment as of July 27 when he wrote to the court to seek a six-week adjournment of his trial.

“It appears from the said email that as at the 31st day of July, an appointment had not yet been made. I agree with the learned counsel for the prosecution that there is indeed no letter from the said German surgeon that the 1st defendant, Dr Orji Uzor Kalu, would require any surgery whatsoever. The entire scenario appears to me ridiculous.

“The conduct of the 1st defendant, Dr Orji Uzor Kalu, in the matter since the ruling of this court on the 31st day of July 2018 wherein the court dismissed his no-case submission is highly irresponsible.

“A litigant who deliberately or carelessly disregards an order of court cannot expect the discretion of the court to be exercised in his favour. Justice, after all said and done, is for all the parties.

“No one, no matter how highly placed can be above the law. Let it be said loud and clear that this court will apply the law with the full force it requires,” Justice Idris said in his ruling on Monday.

Earlier when the case was called, Kalu’s lawyer, Mr Gordy Uche (SAN), had lamented that “we seem to have a little problem with the 1st defendant.”

Uche said, “The medical appointment was slated for the 2nd of August, but he couldn’t get a flight to Germany. Unfortunately, the surgeon went on summer vacation, however, the appointment is slated for today (Monday).”

Uche urged Justice Idris to further adjourn the case “to enable him (Kalu) do his surgery and recover.”

“Only the living can be tried,” the defence lawyer noted.

But opposing the application for further adjournment, the prosecuting counsel for the Economic and Financial Crimes Commission, EFCC, Mr Rotimi Jacobs (SAN), contended that the former governor had no justification to be absent from court on Monday.

Jacobs told the judge that after applying for a six-week adjournment on July 31, Kalu had been about the country for political activities and even went to the North to receive a chieftancy title.

While noting that Justice Idris had been given September ending deadline to conclude the case, Jacobs urged the judge to revoke Kalu’s bail for absenting himself from the court today.

“He (Kalu) can not on his own, extend the medical permission given to him by this court; a person going about everywhere obtaining chieftaincy title, doing politics in the country; this (surgical) appointment is contrary to the order of this court.

“Having jumped bail, I apply that his bail be revoked,” Jacobs said.

In his ruling, Justice Idris agreed with Kalu’s lawyer that up until July 31 when his no-case submission was dismissed, Kalu had always been punctual in court for his trial.

He, however, berated the ex-governor for staying away from court today, questioning the truthfulness of the Germany surgical appointment.

He, however, adjourned the case till September 20 and 21, 2018, stressing that Kalu must make himself available.

The EFCC is trying the former governor, who is now a chieftain of the ruling All Progressives Congress, on 39 counts of alleged N7.65billion fraud.

Kalu is being tried alongside his company, Slok Nigeria Limited, and Ude Udeogu, who served as Director of Finance and Account at the Abia State Government House during Kalu’s reign as governor.

In one of the counts, the EFCC alleged that Kalu, who was Abia State Governor between 1999 and 2007, “did procure Slok Nigeria Limited, a company solely owned by you and members of your family – to retain in its account, domiciled with the then Inland Bank Plc, Apapa branch, Lagos, an aggregate sum of N7,197,871,208.7 on your behalf.”

The prosecution claimed that the N7.1bn “formed part of the funds illegally derived from the treasury of the Abia State Government and which was converted into several bank drafts before they were paid into the said company’s account.”

The prosecuting counsel, Jacobs, said the ex-governor violated Section 17(c) of the Money Laundering (Prohibition) Act, 2004, and was liable to be punished under Section 16 of the same Act.

Apart from the N7.1bn, which he was accused of laundering, the ex-governor and the other defendants were also accused of receiving a total of N460m allegedly stolen from the Abia State Government treasury between July and December 2002.

The prosecutor said they breached Section 427 of the Criminal Code Act, Cap 77, Laws of the Federation of Nigeria, 1990.

On their part, Udeogu, Slok Nigeria Limited and one Emeka Abone, said to be at large, and another fellow, Michael Udo, also at large, were accused of collaborating with Kalu to conceal the “genuine origin” of allegedly stolen funds.

The EFCC said they are liable to be punished under Section 14(1)(b) of the Money Laundering (Prohibition) Act, 2004.

The defendants, who have been standing trial for 11 years, however, pleaded not guilty to the charge.

Be the first to comment on "N7.6B Fraud: Judge Says Ex-Abia Governor, Conducting Himself Irresponsibly"