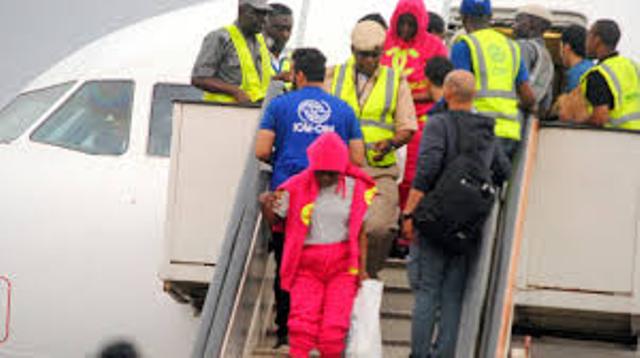 The International Organisation for Migration (IOM) will tomorrow  bring into the country another batch of 180 Nigerians repatriated from Libya.

This is just as another batch of Nigerians are awaiting deportation from Germany Thursday next week.

Aviation Security (AVSEC), a department under the Federal Airports Authority of Nigeria (FAAN) source told AbelNewsng.com at the Murtala Muhammed Airport (MMA), Lagos that the returnees would be assisted back to the country by IOM, which has been responsible for repatriation of Nigerians from Libya in recent time.

These voluntary returnees are Nigerians, who had attempted to travel to Europe through the desert and Mediterranean Sea and other illegal routes, but their travel plans were truncated by the civil war in Libya.

Abelnewsng.com learnt that deportees would be brought into the country at 8pm on board a chartered flight from Europe.

About 2,000 Nigerians have returned from Libya in the past one year through the Lagos Airport with many of them lamenting their sordid treatment in the North African country.

On recently, a batch of 171 Nigerians were returned from Libya for illegal migration.

The returnees made of 70 female adults including nine pregnant women, 90 male adults, three children and eight infants while eight of them returned to the country with health related issues.

The returnees had arrived the cargo wing of the Lagos Airport via Buraq Airline with the registration number 5A-DMG at about 8:25 p.m and flight number UZ589.

NEMA had said that the returnees were brought from Zintan District of Libya.

Be the first to comment on "Libya Deports 180 Nigerians"