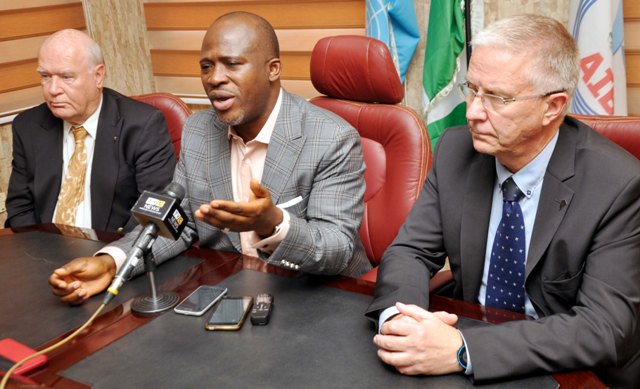 Accident Investigation Bureau (AIB) is to review its existing regulations to accommodate latest changes in the global aviation industry.

This is just as the agency restated its determination to ensure that its operation conforms with European standards and continue to retain its position as the leading incident and accident investigative organisation in Africa.

The Commissioner of AIB, Engr. Akin Olateru said this at the end of a weeklong peer review exercise carried out in conjunction with European consultants at the weekend at its headquarters at the Murtala Muhammed Airport (MMA), Lagos.

Olateru said that management had already circulated the information about its intent to review its existing regulations to concerned stakeholders in the sector, adding that the review exercise would take place before the end of the year.

Recalled that AIB had in February 2016 carried out a similar exercise in Lagos, which improved its activities and duties to the entire aviation industry especially as it concerns accident and incident investigations.

However, the AIB boss contended that some of the existing regulations had since become outdated and needed changes, which he said could not be accommodated with the current regulations in use.

He also pointed out that the International Civil Aviation Organisation (ICAO), recently reviewed its Annex 18 to accommodate new developments in the industry, stressing that in order to remain relevant, an organisation like AIB would need to consistently look at its regulations.

Olateru added that the core mandates of AIB was to investigate accident, recommend safety to prevent future occurrence and make aviation safer for business and air travellers, stressing that the planned review was part of such processes.

According to him,“AIB came to bear in 2007 via the Civil Aviation Act 2006; our regulation was designed to guide how you do things. That regulation is outdated, it has to be reviewed. Regulation basically is to guide the stakeholders and to let everybody know this is how reporting system is done. If you look at Annex 18, it has just been reviewed by ICAO. We need to bring our regulations to speed to capture those new areas because you have to constantly review how you do things for you to stay relevant, if not, you will become outdated. It is easier to review regulations than to review the Act. Act is forever.”

He continued, “More so, the need to review our regulations was part of ICAO findings the last time it audited us. ICAO observed that there were lots of gaps in the current regulations, which had called for this review. As a responsible organisation, you have to constantly put your regulations, processes, systems and Standard Operating Procedure (SOP) to test to make sure there is still life and they are still going to work in accordance to your objectives. And, if you find any gaps, you need to review and make it alive.”

On the peer reviewed carried out by two consultants on behalf of the bureau; Mr. Caj Frostell, the former Commissioner of Banjul Accord Group Accident Investigation Agency (BAGAIA) and Mr. Ismo Aaltonen, Chief Air Safety Investigator, Safety Investigation Authority, Finland, Olateru said this was necessary to bridge the existing gaps in the system.

He explained that the peer review exercise included equipment, infrastructure, technical personnel, system, processes and procedures, regulations and the entire organization while also benchmarking it with European standards.

Olateru explained that the duo checked the entire AIB’s books to determine its conformity with best standards, adding that the bureau would continue to invest in infrastructure and human capital in order to remain relevant in the industry.

Commenting on the exercise, Frostell, said that AIB’s equipment and technical personnel could compete with the best in the world.

He specifically mentioned that the bureau’s flight safety in Abuja was state-of-the-art, which would further make the agency to retain its number one position in the sub-region.

He, however, noted that AIB needed to close some noticed gaps in the existing system.

“This kind of review has been conducted in most European countries and this is international efforts to basically do the same thing in using the same material and again, we were very happy to see that the steps taken by AIB are very much on international level. In his less than two years in leading activities at AIB, there has been tremendous development in the activities of AIB. It takes a strong, good leader to accompany the strides he has achieved since he assumed office. We are very impressed with the way he has been leading the industry and certainly the aim of centre of excellence and the leading agency in Africa is getting better by the day,” he said.

Aaltonen on his part stated that AIB could handle all forms of accident investigations with its current equipment and personnel.

He however called for more training and retraining of technical personnel to remain current on the job.