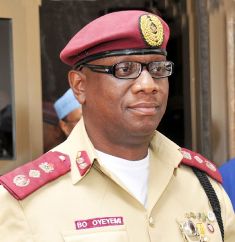 As the Federal Government declares Tuesday and Wednesday as public holiday to mark the 2018 Eid el kabir celebration, the Corps Marshal of the Federal Road Safety Corps (FRSC), Dr. Boboye Oyeyemi has called for patience and collective vigilance on the roads to make the celebration hitch-free.

He made the call in his Eid el kabir Sallah message issued by Corps Public Education Officer, FRSC Bisi Kazeem.

The Corps Marshal in the message assured members of the public that FRSC’s commitment to ensuring safer road environments before, during and after any celebration that attracts increased human and vehicular traffic remains unwavering.

He called on the motorists to drive with care and show patience to other road users as a reflection of the spirit of sacrifice which the season symbolises.

According to him, Eid el kabir is traditionally a feast of sacrifice which provides opportunity for all Muslims to reflect on the sanctity of lives and mercies shown to mankind by God as evidenced by the substitution of a ram with the life of Ismail.

He further noted that the lesson of the sacrifice demonstrates how God takes the sanctity of lives and need for people to take measures that can ensure human safety.

“The magnanimity shown to prophet Abraham by way of God substituting a ram for the life of his son, Ismail as is being observed in the Eid el kabir celebration is a great lesson for mankind,” he stated.

Oyeyemi enjoined the people to avoid acts capable of exposing their lives and that of their neighbours to dangers during the celebration.

While congratulating the Muslim faithfuls on the celebration, he stated that adequate numbers of FRSC Regular and Special Marshals as well as logistics have been mobilised for effective traffic management, rescue operations and support to road travelers across the country.

To achieve the desired results, the Corps Marshal directed patrol teams to focus more on specific offences like wrongful overtaking, use of phone while driving, traffic light violation, drunk driving, overloading and lane indiscipline as well as use of extra lights by articulated vehicles during the special operations.

He solicited the cooperation of members of the public and enjoins motorists to obey the directives of the personnel of the FRSC and other law enforcement agencies who have been deployed for the assignment across the country.

Be the first to comment on "Sallah Celebration: Oyeyemi Calls For Patience, Collective Vigilance"