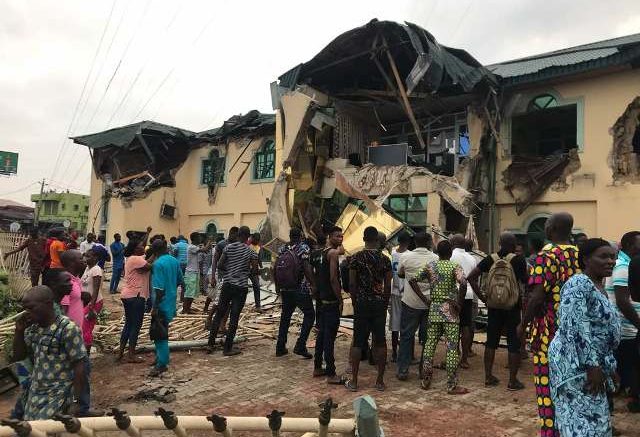 The state-of-the-art studio was demolished yesterday despite a court injunction restraining the state government from demolishing the edifice .

Condemning the action of the government, said that the, “the unlawful demolition of Fresh FM building owned by Yinka Ayefele, and the forced eviction of residents by the Oyo State government”, describing it as a “grave violation of fundamental human rights and contrary to international law.”

To prevent the government from pulling, Ayefele had approached the court to obtain “an order of interlocutory injunction restraining the defendants/respondents whether by themselves, their servants, agents, privies or any person acting pursuant to the instruction of the defendants/respondents from demolishing or attempt to demolish the property of the claimants/applicants lying, being and situate at plot 11A and 11B along ring road linking the Lagos-Ibadan express road, Ibadan, Oyo State or in any manner proceeding to enforce the notice of demolition dated August 13, 2018 with reference No. TF20181308/002 issued by the defendants/respondents pending the determination of the substantive suit already filed.”

Justice I.S Yerima of an Oyo State High Court, had on Monday, ordered the hearing notice and necessary processes to be served on the Oyo State government at the hearing of a motion ex parte filed by Yinka Ayefele.

At the hearing of the application, Chief Olayinka Bolanle, who led a team of lawyers for Ayefele, told the court that the ex parte application became a compelling necessity following the short demolition notice issued by the government.

Ayefele prayed the court to declare that demolition without a prior court order violates Sections 36 and 40 of the 1999 Constitution because it was issued without a hearing granted Ayefele, who has a subsisting approved building plan number IB/SE/TP/C/019 of June 6, 2008.

But in his reaction, Ayefele insisted that he has all the necessary building permits obtained from government for the construction of the building.

Defending its position, the Oyo State Government stated that the demolition notice to Music House, Fresh FM 105.9, Ibadan was not based on sentiments or witch-hunt, adding that the contravention notices were served to different organisations in the state since June 14, 2017 including all radio stations in the state.

A statement issued by the State Commissioner for Information, Culture and Tourism, Mr. Toye Arulogun, explained that the decision of the state government to demand the building approved plan was not peculiar to Music House, Fresh FM as according to him several companies and institutions such as University of Ibadan, Kola Daisi University, University College Hospital, banks and radio stations in the state were asked to provide their planning approval, adding that “the government recently demolished several banks ATM extension and some local government structures in the state.”

“The letter to Fresh FM was received by one Bamiduro Aderonke and a reminder dated 18th August 2017 was sent to the radio station to again request for the planning approval/permit for the Radio Station in line with the Oyo State Physical and Development Control laws in which the radio station was expected to forward the approved building plan to the Bureau within seven days. A copy of the letter was received by Adebisi Akinfunmi on the 21st of August 2017,” the statement reads in part.

He added that the submitted approval from Music House deviated from the approved plan, which in effect makes the approval null and void because deceitful information was given to the approving authority and also deviation from the approval granted both in construction and use.

Be the first to comment on "Oyo Govt. Pulls Down Yinka Ayefele’s N800M Fresh FM Building"