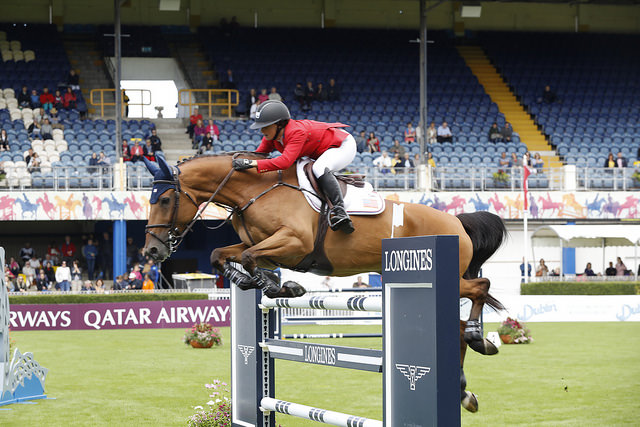 Qatar Airways is to sponsor the Longines FEI Jumping Nations Cup of Ireland at the Stena Line Dublin Horse Show as the Official Airline Partner for the second consecutive year.

The Stena Line Dublin Horse Show, one of Ireland’s most prestigious sporting events and a celebration embedded in the Irish culture, also celebrates its 145th show this summer.

Speaking on the partnership, Qatar Airways Group Chief Executive, His Excellency Mr. Akbar Al Baker, said, “Qatar Airways is delighted to partner once again with one of the most prestigious international equestrian events in the world, the Dublin Horse Show. As the national carrier of the State of Qatar, we are especially pleased to celebrate the love of horses that both Qatar and Ireland share. Our sponsorship of this event celebrates this common affinity, as well as our first anniversary of direct service between Doha and Dublin. This partnership also demonstrates the strength of our commitment to Ireland, a destination always popular with Qatar Airways customers. We look forward to bringing even more travellers to the Emerald Isle.”

RDS Chief Executive Officer, Mr. Michael Duffy, said, “The Longines FEI Jumping Nations Cup of Ireland at the Stena Line Dublin Horse Show has for generations been a key calendar event in Irish sporting and social circles. It serves as the pinnacle event for the Irish sport horse community and is considered by many to be one of the best equestrian events in the world. This is made possible through generous support from our sponsors, and we are delighted to welcome back Qatar Airways for a second year of partnership. They added greatly to the show last year, bringing additional energy and presence, and we are sure that the second year of our partnership will be just as rewarding.”

According to the airline, the Stena Line Dublin Horse Show is one of Ireland’s most anticipated events and a highlight of the summer social calendar. In June, the award-winning airline celebrated its one-year anniversary of direct service to Dublin.

The award-winning airline commenced its first flight to Dublin 12 June 2017 strengthening its ties with the Irish market while connecting passengers from Ireland to more than 150 destinations around the world.

Last week, Qatar Airways also celebrated one of the highlights of the flat-racing season, the Qatar Goodwood Festival in partnership with Qatar Racing and Equestrian Club.

Qatar Airways operates daily flights to Dublin with a Boeing 787 Dreamliner aircraft with 22 seats in Business Class, offering passengers direct aisle access with its 1-2-1 configuration, and 232 seats in Economy Class with a 3-3-3 configuration.