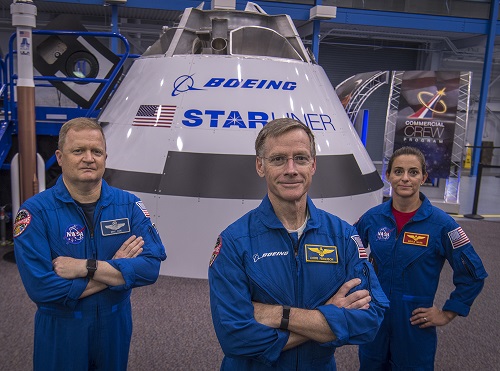 According to Boeing the three pioneers will help restore American access to space from U.S. soil, a capability that ended when the shuttle was retired seven years ago. Mann will also make history as the first female astronaut on the inaugural crewed flight of a new U.S. spacecraft.

Speaking, the President and CEO of Boeing Defence, Space & Security, Leanne Caret said, “We’re immensely proud of Chris and thrilled he will be part of first Starliner crew. We congratulate all the astronauts chosen to fly to the space station on commercially developed systems. We’re taking important steps for this nation and toward development of a thriving commercial space ecosystem.”

Ferguson has been an integral part of the Starliner programme since retiring from NASA and joining Boeing in 2011.

He spent more than 40 days in space for NASA during three shuttle missions.

“The engineer in me always thought if I’m not flying a spaceship, I ought to be part of the team building one. My fingerprints are all over the Starliner and I’m thrilled to get the chance to go back to space on a vehicle that I helped design from the ground up. Riding along with me are all of the members of the Boeing team who have put their hearts and souls into this spacecraft,” Ferguson said.

The Starliner flight will be Mann’s first journey to space.

Boe will be making his third trip to space. Mann is a U.S. Marine Corps lieutenant colonel and pilot of the Boeing F/A-18 Hornet fighter jet, while Boe is a retired U.S. Air Force colonel who was a test pilot on the Boeing F-15.

He also helped make the space station a home by delivering a kitchen, bathroom, sleeping quarters, water recycling system and exercise machine during the STS-126 mission.

The development of a safe, reliable, and cost-effective solution for crew transportation services to and from the International Space Station will allow the on-orbit research facility to continue to fulfill its promise as a world-class laboratory.

With NASA as the anchor customer, Boeing’s Starliner is setting the foundation for commercial passenger flights to and from low-Earth orbit destinations, to include international astronauts, scientists and even tourists.